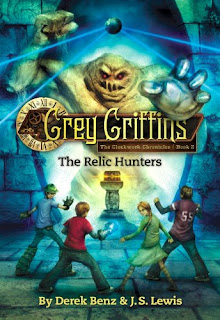 Grey Griffins-The Clockwork Chronicles Book 2, The Relic Hunters, is an adventure filled middle grade novel published by Little Brown and Co. Written by Derek Benz and JS Lewis, it finishes up at 349 pages.

The story- The Grey Griffins are back, but things aren’t well at Iron Bridge Academy. Ernie is angry with Max for not saving his friend in the previous book and these feelings begin to split the group apart. So, as Ernie moves further and further into the changeling world, Natalia finds new friends among the girls at school, Harley works at Monti’s workshop, learning the ins and outs of clockworks and Max preps for the finals of the Round Table tournament, our four friends don’t spend a lot of time together.
As the Griffins grow apart, their enemy, Von Strife is on the move, looking for an ancient relic that will allow him to open a portal to the shadowlands.

My Thoughts- I liked the book, it wasn’t quite as exciting as book 1, but it kept the story moving and the twist at the end is exciting. It is fun to watch the kids train in a special relic hunting class and fight against evil slavers in New Victoria.
I also liked that it wasn’t just the Grey Griffins; it was also a group of Halflings. They have to learn to work together in order to solve their problems and find the lost relic. They get to train in a virtual room, which reminded me of the danger room for the X-men, so that is fun. The author does a great job describing clockwork machines so that the reader gets a feel for the robots and tech that is involved. It is a good read for ages 8 and up.

For Parents- Violence-yes. Sex- no.
Posted by Dorine White at 6:00 AM