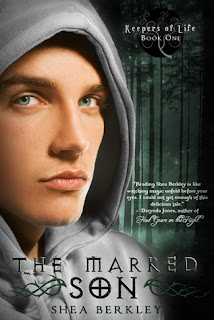 The Marked Son, by Shea Berkley, is a YA fantasy novel that takes place in the normal world and the world of the fey.

The Story- Dylan has a rough life. His mother is a flake who abandoned him on a sheep ranch with his grandparents, who he’s never even met. The one thing in Dylan’s life that brings him peace, are his dreams of a strange girl, dreams he’s been having since he was eight. But lately, his dreams have taken a bad turn and he feels that somehow, his dream girl, is in danger.


On the sheep farm, Dylan finds a place to plant his roots. Things are going somewhat well until strange things start happening, and only Dylan can see them. Suddenly, he is pulled into the world of fairy, a world where a cruel ruler is intent on killing half breeds and taking over the realm.

In the world of fey, Dylan finds the girl he’s been dreaming about, Kera. She is a hidden half breed, and allotted to become the cruel tyrant’s wife. Together, Kera and Dylan fight to change things and protect the one’s they love.

My favorite character is Dylan. He is so interesting. His character shows lots of growth and understanding. He goes from an abandoned teenager to a loyal, brave friend.

The story is told from both Dylan’s and Kera’s point of view, which allows the reader greater insight into the unknown fairy world and also into each character. There is a bit of violence and some death. A good read for ages 10 and up.
Posted by Dorine White at 6:00 AM