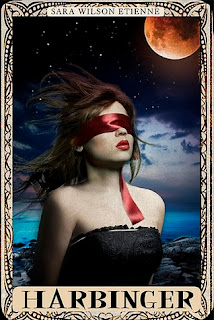 Time for a YA paranormal thriller entitled, Harbinger, by Sara Wilson Etienne. Published by Putnam, it hits shelves on Feb.2, 2012. To win a SIGNED ARC and some swag, fill out the Rafflecopter form.

The Story: Faye has problems. She lives in a world where the environment is out of control, where oil reserves are exhausted, and where people survive in Cooperatives. On top of all that, she’s a bit crazy. From the time she was six, she’s heard and seen things no one else could.


Now, her parents have shipped her off to , a school for troubled youth. She is placed into a group with six other teens, her new “family”. While there, her problems become worse, and it starts sucking her new friends into the situation. Every morning, all six of them wake up with blood on their hands and no memory of the night before. Making things more confusing is her interest in Kel, a strange boy that seems to connect with Faye on an intimate level.

Determined to unravel the mystery of her strange behavior and visions, Faye takes on the world of the supernatural past.

My Thoughts: I have had a hard time reviewing this book. The first 2/3 was amazing, and I couldn’t put in down. The story of Faye sucks you in, begging you to read on and solve her mystery. Clues are left around the academy, and as a reader, you follow every one. The plot is complicated and full of twists. I actually didn’t figure out the entire mystery because the author keeps it well hidden.

Now, the last 1/3 of the book, where the mystery is explained, was troubling. There’s such a big build up, and then the conclusion is just strange. It does fulfill its role, tying up all the loose ends and explaining everybody’s different parts. But, it just wasn’t very satisfying. Plus, even though the character of Faye is well fleshed out, her love interested, Kel, is not. I think this is because the author wanted to leave us wondering if Kel is the Harbinger or not. But, in doing so, you don’t really get to know him and you don’t feel invested in their romance, which is supposed to transcend time.

The cover is absolutely amazing. I know that is not part of the author's work, but I often pick up a book because of the cover, and this one would drag me in. A unique and suspenseful story, Harbinger does find a niche in the YA market, but I came away with ambiguous feelings. I say, give it a shot, it really is a unique work of art.