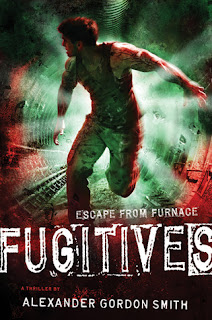 The fourth book in the Escape from Furnace series, Fugitives, is here! Written by Alexander Gordon Smith, it will hit shelves on Feb. 28, 2012.
The Story: Alex is out. He has escaped the Warden, but now, the evil Mr. Furnace is after him with a whole host of berserkers.

Trapped in the city nearest the prison, Alex desperately tries to reach safety with his friends and a new girl interest. Unfortunately, the city is put into lock down and the police are searching for all the escaped teenagers. If it was just the police, Alex might stand a chance, but due to the break out, Mr. Furnace has sped up his evil plans of world domination, and sent Black Suits and Berserkers out to take over the city, killing everyone in sight.
The only way to fight back is for Alex to delve deeper into the dark, ingesting a newer and stranger form of the black starry solution that causes change.
My Thoughts: Wow, another gory thriller from Smith. It’s nice see Alex on the outside, but honestly, I can’t see where the series is headed. Everything is so dark. I fear the final story might not have an ending I like.
But, about this particular novel, I couldn’t put the book down. The reader is dragged along for all of Alex’s adventures, kicking and screaming. The question to his destiny always hovers just out of reach. Full of action and tension, this book is a worthy sequel. However, just like the others in this series, it is for mature readers. There is a lot of violence, gore and disturbing images.
Posted by Dorine White at 6:00 AM