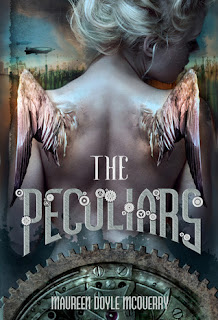 The Peculiars, by Maureen Doyle McQuerry, is an interesting YA fantasy with hints of steam punk. Published by Amulet Books, it will hit shelves on May 1, 2012.


The Story: Lena wants to know who, or rather what, she is. From the time of her birth she’s been different, with long, double knuckled fingers and huge, yet skinny feet. A doctor once told her mother that Lena was part Goblin. But, since Lena’s father disappeared a long time ago, there is no one to ask about the truth.


On her eighteenth birthday, Lena inherits a small sum of money and decides to travel into Scree, the rumored home of so-called peculiars (people who aren't quite human). She gets waylaid in the small costal town of Knoster, and ends up working as a library assistant to the strange Mr. Beasley. She enjoys her time in his eccentric house and develops a relationship with her co-worker, Jimson Quiggley.

However, Mr. Beasley knows more about the world of peculiars than he is willing to share, and Lena gets wrapped up in a government conspiracy that might betray her friends. On the run, Lena travels into Scree, hoping to find her father. Instead, she finds other peculiars enslaved as mine workers because of their differences. Can she save her friends and discover the truth about her heritage?

My Thoughts: I enjoyed this book, mostly because it has a different flare than other fantasy novels. It takes place in the past, using steam punk gadgets and fairy tale creatures. I like Lena. Her character is vulnerable, real, and because of this, she ends up believing other people’s lies and getting herself into trouble.

The mystery of who Lena is also pulls you through the story. Though important to the plot, by the end of the book you realize the answer doesn’t matter. Lena is who she is, and doesn’t need a label. But, FYI, the author does answer the question.

Another aspect of the book I enjoyed, were the side characters. The author does a good job fleshing out their storylines. The strange Mr. Beasley is a great eccentric, yet lovable old man. Jimson, Lena’s love interest, is a developing character, someone who grows and changes his views throughout the book. And then there is Merilee, a peculiar with wings. Her character comes to be almost like a sister to Lena.

The Peculiars is a different type of fantasy story with a good plot and well developed characters. The cover art is also amazing. I say put this in your ‘to be read’ pile.
Posted by Dorine White at 6:00 AM