*No giveaway today, but check back on March 17, 2012 for the Lucky Leprachaun Hop. 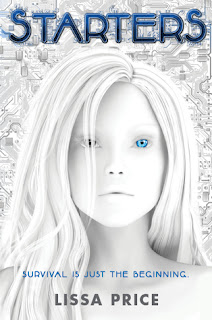 I have a great YA dystopian to review today. It comes out this week on the March 13, 2012. Published by Delacorte Press, Starters is a new children’s book written by Lissa Price.


The Story: Just a decade earlier, the world was at war. Our enemies developed a spore that would kill any human it touched. A vaccine was made, but there was only enough to give to seniors and young children. When the spores hit, the only survivors were the Enders or seniors, and kids or Starters.


Now, science has made it possible to live well into your hundreds, but though you live, your body still decays. Thus Prime Destinations is created. Run by Enders, it is a top secret lab that allows Starters to rent out their bodies to Enders.

Our heroine, Callie Woodland, makes the decision to rent out her body so that her little brother can have medicine and they can both live in a real home instead of on the streets.

But something goes wrong during Callie’s switch, and suddenly she finds herself coming and going at odd intervals, finding herself in the weird circumstances in which her renter has left her. The worst is when Callie wakes up with a gun in her hand. What is her renter up to?

Callie finds herself at the center of a new world order, one where kids are expendable, and Enders want to live forever.

My Thoughts: Loved it! How creepy is it to rent out your body so an old person can relive their youth? The kids in this world have no other choice. If they didn’t have any grandparents when the spores hit, they are alone in the world, forced to live on the streets, and forbidden to do legal work. They need food and shelter, and Callie has the added burden of her sick little brother.

The idea is ingenious. The Enders have all the money, so they are behind all the scientific research occurring. First they extend their lives, but they can’t stop their bodies from aging, so now, in a super secret lab, that only the uber rich Enders can afford, they will switch you into some poor child’s body. The children are guaranteed lots of money and told the Enders must sign a contract to not harm the host body. But as Callie finds out, rules are meant to be broken.

First off, this book has lots of great twists and turns. And there are TWO plot twists at the end. Both of which I didn’t see coming, Wow. The characters are well defined, lively and full of human characteristics. Their voices seem deep and real. Callie’s need to help her brother, no matter the consequences, is an old tale, but full of heart. The action is tense, building and building to the climax. And then, boom!

I can’t wait for the second book, Enders, coming in winter 2012. I really want to know who is behind The Old Man’s mask. I also want to know what he means when he tells Callie that no kid will be safe in the future.
Posted by Dorine White at 6:00 AM