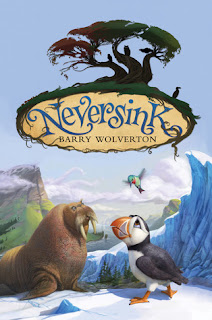 Welcome to this stop of the NEVERSINK BLOG TOUR! Today, I have the great opportunity to review Barry Wolverton’s book, Neversink. It is published by Walden Pond Press and hit shelves last week on 3/27/2012. I have my review copy to give away to one lucky reader. Just fill out the rafflecopter form below. If  you don't see it, click 'read more'.


The Story- Way up in the Arctic Circle are two islands, Neversink, home of the Auk birds, and Tytonia, home of the owls. On the island of Neversink lives our main character, Lockley J. Puffin, an auk who is not content with his plain way of life. He also has two concerns: his pregnant wife and his best friends, Egbert the walrus and Ruby, the hummingbird.


Over on the island of Tytonia, an owl revolt is taking place. Rozbill, a crazy tyrant, has taken over the owl parliament and is intent on making slaves of the auk birds. Of course, the only thing standing in Rozbill’s way is Lockley, who is willing to stand up for what is right, while the other auks simply obey.

Lockley’s quest for freedom takes him to Tytonia, where he is imprisoned, and then engages in a daring escape thorough the bowels of the earth. He ends up at the North Pole where walrus’ live (and from where Egbert was exiled) and eventually heads down below the oceans to find a sea goddess.

My thoughts – First off, the cover of the book is great. My children saw it and immediately wanted to read the book. Because the story is about animals, I thought that this was a humorous middle grade book, surprisingly, it wasn’t. The book, though very humorous, also takes on deep issues and is really more for the older middle grade and teen reader.

A big plus is the list of auks and owls before the book starts. With all the different species included in the book, things would have gotten confusing if I hadn’t had a reference with pictures to turn back to.

The novel is written with an Omni present narrator, who chimes in with bits of information and humor. I found the continuous mention of technology and vocabulary that exists now, but not back during the time of the book odd. The narrator pops in a lot to mention that, oops, these things haven’t been created yet. You get used to it after a while and it adds to the humor.

One of the reasons I believe this book is for older readers, 10 and up, is because there is violence. Though the violence occurs between the animals, it is still very real and could be disturbing to young readers. However, the violence is also necessary in the telling of the story and the horrors that Rozbill, the owl leader, invokes on the auks. Also, the themes of injustice and tyranny that run through the novel will be more evident to older readers.

I really enjoyed this book. It is something different, yet fun, with a good storyline, strong characters and great settings. It is very well written and full of creative imagery.

A little about the author, Barry Wolverton  - Barry Wolverton is the first human ever granted access to the  walrus library at Ocean’s End, where he conducted extensive research for NEVERSINK, his first book. In addition to Walrus he speaks Chicken, although actual chickens don’t appear to understand him. He lives with a moderately overweight cat named Charlie (who understands him but doesn’t listen) in Memphis, Tenn. Visit him at www.barrywolverton.com.

Craving more?  Visit the rest of the stops on the tour:
Neversink Blog Tour – March/April 2012


Tuesday, 4/3 – Guest Post with The Other Side of the Story
Wednesday, 4/4 – Interview with There’s a Book
Thursday, 4/5 – Interview & Giveaway with National Children’s Book Examiner
Friday 4/6 – Author/Editor Interview at Another Gray Day