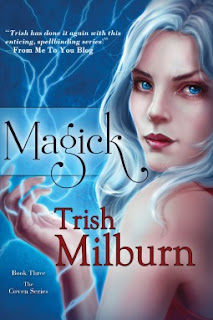 Welcome to the conclusion of The White Witch series, Magick, by Trish Milburn.

The Story-
(Goodreads- normally I write my own, but this one summed up the series well.)

The covens are coming for her.

But is she a White Witch or a Dark Witch? In a war for control of the witch world, the answer will save-or doom-everyone she loves.

In White Witch, Jax gained friends she'd die for and a staggering power that threatens them all.

In Bane, Jax did the unthinkable and killed a supernatural hunter to protect her friends. She found herself lost in darkness and prisoner to the Bane, a secret society of witches sworn to prevent the use of the dark magic.

Now, in Magick, the powers of Jax and her friend Egan have been magically bound by the Bane. She must convince the Bane she can learn to control her power and become a White Witch in truth. She's their only hope now that the dark covens have called a Conclave with one purpose-to kill this generation's White Witch and anyone who has ever stood with her. If Jax can't amass an army of her own, rebuild the trust of her friends and boyfriend, and find the White Witch's elusive weapon against the dark, it may be too late.

We finally get to meet the Bane! It has been a tense build up until now, and with the ending of book two, we didn’t know what shape Jax was in. The storyline builds, and soon we have Jax fighting to control the dark magick within her, hoping to tap into her white witch powers. Her character is well written, and by this third book we really know what makes her tick. But, she herself doesn’t. She is filled with angst and doesn’t know if she can win. We watch her struggle, afraid that she might kill the ones she loves.

The love stories are still going strong. For Jax, her soul mate is Keller, a supernatural hunter that calms her dark side. Then there is Egan, the male good witch, who is in love with Toni. Together, all four of them become a coven of their own that supports and fortifies each other.

The twist to the plot is Jax learning a secret that will allow her to defeat the dark covens. I enjoyed the twist; however, the final battle scene wasn’t intense enough. It seemed way too easy for Jax, when supposedly hundreds of dark witches were massing to kill her. But, at least we get a satisfying ending.

This whole trilogy has been fun and I’ve enjoyed entering Jax’s world. You should give it a go.