Let's meet author Monique Bucheger , author of The Ginnie West series of middle grade books. I had the chance to interview Monique as part of The Secret Sisters Club Book Tour. 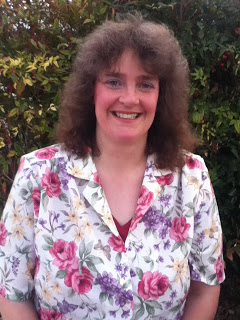 1) Tell me about the series in your own words?

My Ginnie West Adventure series grew from my pre-teen imagination. Ginnie was a fun-loving girl with a lot of spirit who lived in a family that cherished her and embodied qualities I admire. The Wests are a close-knit group who come together in a crisis for anyone in trouble, in or out of their family.  The West family has endured many hardships, and yet maintains a pretty positive outlook on life. The books celebrate family, friends, friends who are like family and are written to empower people on every side of the child abuse issue.

Mostly though, the Wests are the type of family I think most people want to belong to. Lately it seems that dysfunctional is the new normal, and while that can be entertaining and exciting, I think most people want to feel safe as they deal with the messiness of real life. The “Heart of the Wests” farm is a great place to visit and I love it when I get feedback letting me know that the Wests are the kind of friends and family people would like to have, especially when they don’t.

One woman wrote me and said that she read my books because she wanted to believe such a family could actually exist. Her mom locked her in closets for days on end, physically abused her, and inflicted horrific punishments on her and her sister. It was heartbreaking to read her story, and yet, my story brought light and healing to her. That one letter made me go forward when I started to doubt whether this whole writing thing was really for me.

2) What inspired you to write this series? Well, the not-so short answer is my high school creative writing teacher, Mrs. Johnson, was my first writing cheerleader and the only one to object to my engagement at 17. (I turned 18 a few weeks later.) When I asked her why, she said: “If you get married, you will have a bunch of kids and not write the books you need to write.”

Twenty–two years later I was still happily married to the same man, only with 12 kids and no books. It turns out there were quite a few—a couple of years ago, I found an old box of the ‘books’ I wrote as a teen. For several months, I heard Mrs. Johnson ask: “So, when are you going to write those books?” (Mrs. Johnson passed a few years before, on Halloween, I believe.)

Since I had assured her very vehemently that she was wrong to doubt me, I decided it was high time to make good on my promise. One day I remembered how much fun Ginnie was (I created her when I was 10-ish) and just started writing again. That one book was written to keep my promise and has turned into several. I dedicated Trouble Blows West to Mrs. Johnson.

3. What kind of help did you have along the journey? Lots. Friends, family, other authors, published and wanna-bes (and will be published one day). I have been greatly blessed with many friends who share my passion to write as well as those who don’t write, but care enough to encourage me to pursue my dream. Groups? I don’t have one set critique group like many of my author friends do, but I do have several people that like my stories enough to exchange crits with me. I’ve been blessed with a variety of valuable opinions to help me strengthen my writing in general and my stories in particular. People? About the same time Mrs. J decided to remind me of my unkept promise, I had 2 friends in particular that I confided in that I was ‘writing’ again and both encouraged me to share my story with them. I cringe now when I think those original drafts, but thankfully, my friends didn’t see what I now consider inferior writing. Instead, they saw a story they wanted to share with their kids and grandkids. I took some writing classes, found some incredibly kind and patient critique partners, and nourished my adolescent dream to become an author. And now I have a published series.

4. What book influenced you most as a child? That’s hard to say. I loved Laura Ingalls Wilder (on a side note—her daughter Rose and I share a birthday, which we also share with Walt Disney. J) I read every Judy Blume book I could find. I loved Louisa May Alcott’s books, as well as Madeleine L’Engle and so many authors I can’t recall the names of.

Ginnie was actually inspired by Beverly Cleary’s Ramona Quimby, which must have shown a little as the first publisher to offer me a contract told me he fell in love with Ginnie’s spirited nature and that she reminded him of Ramona. Ginnie has also been called a cross between Tom Sawyer and Pippi-Longstocking, an image I love. 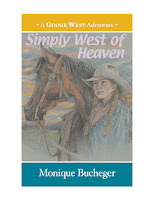 5. How did it feel to win the Amazon Break-Through Novel Award contest? I didn’t win the contest, but I did beat out 4,750 entries to place in the top 5%. THAT felt incredible and gave me the confidence I needed to get serious about writing professionally.

6. Any future plans for writing something not in the Ginnie West Series? Why yes, I have just finished the novella that will introduce the first book of my second series: Ryding Through Troubled Waters. Book 1 is a third finished and Book 2 is mostly finished (I will do a final edit and tweaks after I finish the first book.) Here is my quick pitch:
When his parents return from their second honeymoon in matching mahogany caskets, nineteen year-old Cale Ryder not only inherits the family ranch, but his three teenage brothers and kid sister. Thrust into sudden fatherhood, Cale doesn’t have time for a lot of nonsense and quickly lets everyone know there’s only room for one alpha dog in the fight to keep the family together. While battling a busybody aunt, child protective services, and the rigors of ranch living to provide for his siblings, he tries not to wonder what life would be like if he could do what he wanted, instead of what everyone else needs.

7. What's your advice to inspiring writers?

Hmmm. As a teen, I was part of a group called The Young Author’s Program and I remember meeting a published author who kind of sneered when asked that question by a kid in my group before replying: “Don’t quit your day job.” That always bugged me.

Of course, she may have had good intentions, and I saw sneering where she meant caution, but I say: Write the book you want to read. And if need be, learn to write it better. Just don’t give up.

To paraphrase Tracy Hickman, “Being an author isn’t about being published, it’s about being read.” When you write what you love or have passion about, others can feel it. If you aren’t confident with the end product, get an editor, but don’t give up.