For YA Friday I am taking a look at Scholastic's Witchlanders by Lena Coakley. 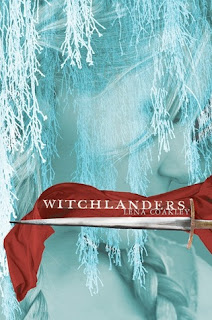 The Story-
Ryder has spent his whole life in the village, paying tithing to the red witches who supposedly protected them from their enemies, the Baen. Ryder's mother used to be a red witch, but left for unknown reasons and started a family. Terrifying times are coming to the village, and though Ryder's mom left magic behind, it didn't leave her. She has visions of utter destruction and war. Ryder thinks it is all a crock, and wants to leave village life.

Falpian is a Baen in exile. He is a magic user, and son of the king. His twin brother, his true magic twin, recently died, and Falpian is in mourning. Unknown to him he is to be a pawn in his father's war against the Witchlanders. But one fateful day Ryder and Falpian meet, and all the old rules and myths are blown away.

My Thoughts-
This is a great fantasy story told from a male point of view. Ryder is a doubting Thomas, and he has good reason to be. The plot is subtle as it unweaves the lies of previous generations. The author does a fabulous job never letting the whole truth come out, not even who the true villain is, until the end. Everything is a big tangle that the reader is excited to unravel.

The characters are well written with different levels of depths. The story is full of adventure, danger, mystery and hope. It is different from other fantasy novels out there, and I think you'll like it.