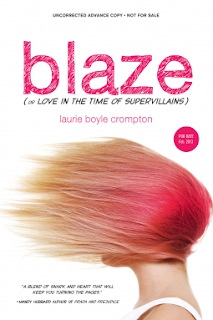 My YA Friday is a little early this week due to a blog hop starting tomorrow. Today I have a review of Blaze by Laurie Boyle Crompton.

The Story-
Blaze spends most of her time driving around her younger brother and his friends. When she gets a break she reads and draws comic books. One day her brother's soccer coach Mark takes notice of Blaze on the sidelines, and a budding romance begins.

Blaze is so excited, and can't believe Mark, a popular guy at school, likes her. They become intimate on their second date, and Blaze thinks all is well. Until, she goes to school and Mark ignores her. What?


To get revenge, Blaze draws a comic about Mark the Shark and his hit and run behaviour. But, Mark retaliates with an indecent photo of Blaze, and the war begins. Blaze goes from Super Vigin Girl to Super Slut in one day, and the whole school judges her instantly. What can she do?

My Thoughts-
This is a book for mature YA. The main topics are comics and sex. In fact, the first few chapters use the word penis so many times, I almost put the book down. But, I'm glad I kept going, because the story that evolved is deep and universal. Luckily the scene where Mark and Blaze have sex in the back of her minivan isn't too intense. What is intense are the results of Blaze's actions.

Blaze has her first time with Mark because she wants him to like her and be her boyfriend. I can see a lot of girls doing this exact same thing. The results are devastating, and the author does a great job portraying Blaze's slide into despair. There is a pregnancy scare, again another universal problem. And then there is the high school rumor mill that reves up and nearly destroys Blaze.

All through the book Blaze is one tough cookie. Even as the world crumbles around her, she keeps finding ways to pull herself back on top. She even has a great scene with her non-present father and his misplaced priorities.

Teens will relate to the frequent use of text messages as story, and also the vivid images of comic book characters that the author weaves through the plot. So, even though I enjoyed the book, I have to put this review out with a note of caution about theme.