Author Interview with Brent Hartinger- The Elephant of Surprise 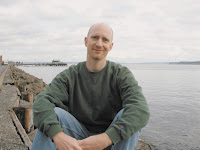 For YA Friday- An author interview with Brent Hartinger, the author of The Elephant of Surprise, a YA gay teen novel that was just released. 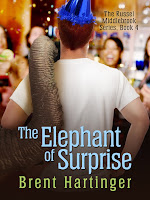 Tell me about the book in your own words?

It's called The Elephant of Surprise, and it's the latest book in the Russel Middlebrook Series, a series of four books (so far!) about a gay teen and his two best friends (a bisexual girl and a straight guy). The series all started with a YA book called Geography Club, which was first published back in 2003, and which will be released as a feature film adaptation later this year – something that has been pretty surreal.

You can see the trailer for the movie and one of the posters here: http://www.shorelineentertainment.com/movies/GeographyClub.html


Anyway, Geography Club was one of the first in a wave of gay YA books to really break out. Which is interesting, because NO ONE (except my editor and agent) thought it would be a hit. My agent had spent about four years trying to sell it, and I'd spent about four years before that trying to sell it on my own. A lot of people liked it and wanted to publish it, but the accountants all said, "Oh, there's no market for a book about gay teens. We can't make any money!"

Obviously, the world has changed a lot since the 1990s. Now you even have gay teens on TV on shows like Glee (although before they got on the air, I'm sure everyone told them, "Oh, there's no market for TV show about gay teens"!). Same thing with the movie version of Geography Club. It took ten years to get made because everyone said to the producers, "There's no market for a movie about gay teens!"

The Elephant of Surprise is a "stand-alone" book – meaning you don't have to have read all the books before it in the series. But obviously, I hope you do!

What influenced you to write this book?

With every book in this series, I've wanted my characters to have some interesting experience. In Geography Club, they start a "secret" gay-straight alliance (they call it the Geography Club because they think that sounds so boring that no one else will want to join. And yes, I have heard from dozens of angry geographers over the years!). In The Order of the Poison Oak (the second book in the series), they go to work at a summer camp for burn survivors. In Double Feature (the third book), they get jobs as zombie extras working on a horror film.

I've also always tried to make the books light and funny, which I think explains some of their success.

Well, for The Elephant of Surprise, this latest book, Russel gets involved with a mysterious guy who's a member of a group called "freegans." They're actually a real-life group of environmentalists who give up all their possessions and live on the streets, foraging for food and other necessities. I remember reading about them years ago. And the more I researched them for this book, the more interesting they became. It's a totally different kind of life – and as Russel learns in the book, it's a pretty fascinating one, and in some ways, even a very romantic one.

Dramatically speaking, there's nothing like a character who makes your main character question everything about his life. That's the function Wade (the freegan) has with Russel in The Elephant of Surprise.

I've been published by lots of different publishers over the years. The first three books in this particular series were published by HarperCollins. But I had six different editors in six years, so the relationship wasn't really working out, and we parted company in 2008.

Usually that means that a series is dead -- no other publisher will publish later books in a series started by someone else. But HarperCollins generously gave me the rights back to two of the books, and I created by own imprint and re-published them on my own. They did surprisingly well, and I knew I'd get some publicity from the upcoming movie version of Geography Club. So I decided to write and publish an original title in the series. The result was The Elephant of Surprise.

For that book, I hired my first editor from HarperCollins, and my first copy-editor. This time around, I had more control, which is gratifying. But it's been more work than I ever thought possible.

As a child, what type of books inspired you?

I had to read Pride & Prejudice as a freshman in high school, and I thought it was just the worst book ever. I was too young to understand the social satire, but even apart from that, it just wasn't my cup of tea. I (and every other boy in my class) didn't understand why I was supposed to care about who this woman married. Pick Darcy, pick Wickham! Who cares?

But around that same time, I discovered fantasy books. That's when I had that epiphany: "Wait. You mean the books don't have to be boring?!?"

I became a voracious reader after that, reading everything I could get my hands on.

I still have a hard time with "literary" fiction -- again, not really my cup of tea. I confess, I like plot. I get bored with meandering, "slice of life" books, or books that are all about flowery language, or books that are only about atmosphere and world-building.

But to each his or her own. There's room in the world for all kinds of books. That's what's so great about them: there's a whole bunch of books for every person in the world.

If you were on an island, what is the one book you'd want with you?

The Lord of the Rings trilogy was originally published as one book, so that's what I'm picking!

Rocky road, which is kind of cliche, isn't it? But it's so good!

Any advice for aspiring writers?

That said, if you must write, then write. But first, learn the craft. Read everything you can -- sometimes you learn more from a bad book than a good one. Surround yourself with other writers, and be open to their criticism (but don't let yourself be crippled by it). Learn the rules, so when you break them, at least you know you're doing it, and why. Make connections in the industry, and don't ever be a jerk or a prima donna. Some writers get away with that on the way up, but it always burns them on the way down.

The odds are really long, true, but it might encourage people to know that when my partner Michael Jensen and I both set out to be novelists, we didn’t know anyone at all (and we didn’t know anything about the world of publishing). Fifteen years later, we’ve both sold multiple books to major publishers and made hundreds of thousands of dollars. From our point-of-view, that’s a one hundred percent success rate!