It's a day to celebrate! Not only is it Pi day- Happy Pi Day! But, my sister-in-law Laurisa Reyes just released the final cover for her latest book, The Last Enchanter. It is book two in the Celestine Chronicles. Due out in October, you can pre-order it now from Amazon! 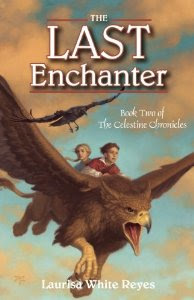 Blurb- Months have passed since Marcus and Kelvin succeeded in their quest to find the Rock of Ivanore. Kelvin is living as royalty in Dokur, and Marcus is studying magic with Zyll. When Fredric is murdered and Kelvin becomes king, Zyll and Marcus head for Dokur in hopes of protecting Kelvin from meeting the same fate, though it quickly becomes apparent that none of them are safe, and Marcus has had disturbing visions of Zyll's death. With the help of his old friends Clovis and Bryn, joined by new friend Lael--a feisty girl in search of her mother--Marcus uncovers a powerful secret that will change the course of his life forever.