The Hero's Guide to Storming the Castle- Review and Giveaway

Argh! Today I have an interview with Cap'n Gabberman from A Hero's Guide to Storming the Castle. He passed on this information to me at knife point, grrr! 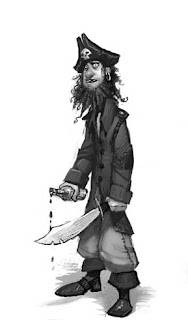 Cap'n Gabberman
Occupation: Pirate
Affiliation: The Stumpy Boarhound Gang
Kingdom of Origin: According to him, he was “born upon the Briny”
Current Residence: Flargstagg, Sturmhagen
Known Associates: Two-Clubs the barbarian, Daggomire Hardrot the half-ogre, Jimmy No-Teeth the buccaneer, Davy Three-Knees the corsair
Longtime Foe: Commodore P.F. Harpsichord of the Royal Svenlandian Navy (imaginary)
Likes: Grog, the feel of the salt air upon his face, barroom brawls
Dislikes: Soggy socks, splinters, manatees (which he has mistaken for mermaids on more than one occasion)
Signature Move: The Bragging Barnacle Buster
Quote: “Arr, a man what trembles in fear at the sight o’ Cap’n Gabberman comin’ over the waves at ‘im, is a man what’s poured too much grog down his gullet. ‘Cause I’m sittin’ in a tavern right now. I ain’t nowhere nears the sea.”
Little Known Fact: Has won seven trophies in the regional Sea Chantey Sing-Off

Before I go any further, I'd better tell ye about the book!

The Story-
The Prince Charmings are back, and so are their princesses. Briar Rose has abducted Liam and is forcing him into marriage, plus she is holding his friends hostage unless he steals for her a magic sword.

Blackmailed, Liam agrees, but only with the help of his friends. Our heroes set out to break into the 11-year old Bandit King's towering fortress, but many mishaps happen along the way.

My Thoughts-
Christopher Healy does it again! His books totally crack me up. The entire story is laced with humor that is so natural, it will have you snorting. Now, unto our characters. The four princes try so hard to be heroes. They come up with detailed plans and have good intentions, but things just don't go their way. I love the attributes of all four princes. They are so fun to read about. Plus, now we have them slowly figuring out who their "real" princesses should be. True love is in for some detours.

Kids are going to love this sequel. It has everything the first one had, and keeps the story rolling. Two thumbs up!

If ye'd like to enter the giveaway, here's what ye need to know:

§  Storming the Castle Giveaway: The first THREE entrants today will receive signed copies of THE HERO’S GUIDE TO STORMING THE CASTLE and EVERYONE who enters is eligible to win a $200 gift card to the bookstore of his or her choice. You will need this SECRET CODE to enter the giveaway: Prince Charming. Now go to this link!
§  Giveaway Link: https://www.facebook.com/WaldenPondPress1/app_141037842748342