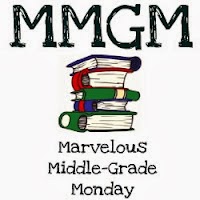 For Middle Grade Monday I am checking out a new series from Simon & Schuster called Sew Zoey by Chloe Taylor. The publisher was kind enough to send me several books in the series when it released over the summer. The unique thing is that the first four books were released one right after the other from June to September.

The first book is called Ready to Wear and sets the scene for the rest of the series. 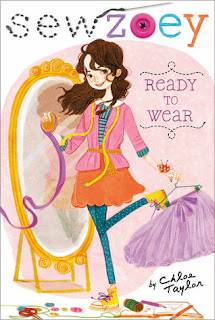 The Book-
Twelve year old Zoey Webber is staying at her Aunt Lulu's house over the summer, and is spending her time filling up sketchbooks with fashion designs. One morning Zoey's best friend Priti texts her to say that their school is doing away with uniforms! Zoey is so excited and plans a back-to-school shopping trip with her friends Priti and Kate. Her friends find out about her fashion sketches and convince her to start her own blog called Sew Zoey. The blog is a hit and Zoey is inspired to learn to sew and actually make her designs.

When school begins, Zoey is front and center with her own creation, but fellow students aren't very nice. She braves their looks though and continues to shine with her own style. The principal notices Zoey and asks if she would be willing to design an outfit for a school auction. Zoey is over-the-moon, until someone sabotages her dress.  Can she go on? Will her blog supporters rally behind her? You've got to read to find out.

My Thoughts-
I really enjoyed this middle grade journey. Zoey is a fun character who is brave enough to wear her own fashions and face whatever comes her way. She has her moments of despair, but because of the followers on her blog, she gains a new found courage.

The topic alone is worth the read. How many people today know how to sew? I think the numbers might be few. The fact the Zoey takes on this art and runs with it will show other children that they can develop talents of their own.

Another fun thing is that the book has several bonuses. Before each chapter are some of Zoey's designs so the reader gets a feeling for what they're reading. Plus, Zoey lists several of her blog posts that allow the reader to get inside her mind. I would have liked to have seen some of the comments people made back because Zoey often responds to those comments, but we don't get to see the source.

The end of the book stuck with me. Zoey makes the decision to forgive. She sets a great example for kids today. 4 stars!

The other books in the series are:
On Pins and Needles
Lights, Camera, Fashion!
Stitches and Stones

Check back on Wednesday where I will be taking a closer look at the author, Chloe Taylor, as part of Inside the Publishing World.
Posted by Dorine White at 5:00 AM