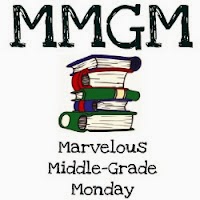 Welcome to Middle Grade Monday! Today I am spotlighting new releases for the week of March 25, 2014, and there are quite a few. I'm sure I don't even have them all, but...
We have...     (blurbs from Goodreads and Amazon)

Minecraft: Redstone Handbook: An Official Mojang Book by Scholastic-(Goodreads) Here's everything you need to know to get connected to the electrifying possibilities of redstone.

From basic mining and logic circuits to more advanced mechanics, this book willl give you step-by-step instructions to get you fully wired to redstone. With builds including redstone traps and arrow launchers you never need fear creepers again!

Plus, see some of the most amazing community creations from the very best redstone builders - they'll blow your mind!

Wings of Fire Book Five: The Brightest Night by Tui T. Sutherland - (Goodreads) The dragonets struggle to fulfill the prophecy and -- somehow -- end the war in this thrilling new installment of the bestselling WINGS OF FIRE series!

It all comes down to this: The Dragonets of Destiny must finally bring the epic war to an end, reconcile the seven tribes, and choose the next queen of Pyrrhia... and make it out alive.

Ever After High: The Unfairest of Them All by Shannon Hale -(Goodreads) It's the aftermath of Legacy Day, the day when the students at Ever After High are supposed to pledge to follow in their fairytale parents' footsteps, and everyone is in a huff and a puff! Raven Queen, daughter of the Evil Queen, has refused to sign the Storybook of Legends, rejecting her story--and putting everyone else's in jeopardy.
The Royal Apple White doesn't want to think Raven is being a rebellious pain, but Raven's choice means Apple might never get the poisoned apple, Prince Charming, and a kingdom to rule. Behind Apple stands the Royals, those who want to play by the book and embrace their stories. The Rebels, supporters of Raven, believe in breaking free from destiny and writing their own stories.
But when the chaos and rivalry land wonderlandiful Madeline Hatter in trouble, Raven and Apple must bring the Royals and the Rebels together to shut the book on their feud before it threatens to end all of their Happily Ever Afters once and for all.

Geronimo Stilton Special Edition: The Hunt for the Golden Book by Geronimo Stilton-(Goodreads)  Grandfather William was throwing me, Geronimo Stilton, a party -- it had been 10 years since I published my first book! He wanted me to write a new book especially for the occasion. Then my laptop was stolen right from under my snout. Cheese niblets, how terrible! Could my friends and I find my computer and print my book all in time for the party?

Whatever After #3: Sink or Swim by Sarah Mlynowski - (Goodreads) Once again my brother and I are in hot water...

We weren't planning to mess up the fairy tales. The first two times, we did it by accident.

But when our magic mirror pulls us into the story of the Little Mermaid, we have no choice but to try and rewrite it. Let's just say the original story does NOT end happily!

Now we need to:
- Convince our mermaid to keep her tail
- Plan a royal wedding
- Avoid getting eaten by sharks

We've got to find a happy ending for the Little Mermaid . . . before she's fish food, and we're lost at sea forever!

The Mark of the Dragonfly by Jaleigh Johnson -  (Goodreads) Piper has never seen the Mark of the Dragonfly until she finds the girl amid the wreckage of a caravan in the Meteor Fields.
The girl doesn't remember a thing about her life, but the intricate tattoo on her arm is proof that she's from the Dragonfly Territories and that she's protected by the king. Which means a reward for Piper if she can get the girl home.
The one sure way to the Territories is the 401, a great old beauty of a train. But a ticket costs more coin than Piper could make in a year. And stowing away is a difficult prospect--everyone knows that getting past the peculiar green-eyed boy who stands guard is nearly impossible.
Life for Piper just turned dangerous. A little bit magical. And very exciting, if she can manage to survive the journey.

The Winter Horses by Philip Kerr -(Goodreads) It will soon be another cold winter in the Ukraine. But it's 1941, and things are different this year. Max, the devoted caretaker of an animal preserve, must learn to live with the Nazis who have overtaken this precious land. He must also learn to keep secrets-for there is a girl, Kalinka, who is hiding in the park.

Kalinka has lost her home, her family, her belongings-everything but her life. Still, she has gained one small, precious gift: a relationship with the rare wild and wily Przewalski's horses that wander the preserve. Aside from Max, these endangered animals are her only friends-until a Nazi campaign of extermination nearly wipes them out for good.

Now Kalinka must set out on a treacherous journey across the frozen Ukrainian forest to save the only two surviving horses-and herself.

This sensitive, inspiring tale captures the power of sacrifice and the endurance of the human spirit

Jaap Sitters was only eight years old when his mother cut the yellow stars off his clothes and sent him, alone, on a fifteen-mile walk to hide with relatives. It was a terrifying night, one he would never forget. Before the end of the war, Jaap would hide in secret rooms and behind walls. He would suffer from hunger, sickness, and the looming threat of Nazi raids. But he would live.

This is just one of the incredible stories told in HIDDEN LIKE ANNE FRANK, a collection of eye-opening first-person accounts that share what it was like to go into hiding during World War II. Some children were only three or four years old when they were hidden; some were teenagers. Some hid with neighbors or family, while many were with complete strangers. But all know the pain of losing their homes, their families, even their own names. They describe the secret network of brave people who kept them safe. And they share the coincidences and close escapes that made all the difference.

Erdas is a land of balance. A rare link, the spirit animal bond, bridges the human and animal worlds. Conor, Abeke, Meilin, and Rollan each have this gift-and the grave responsibility that comes with it.

But the Conquerors are trying to destroy this balance. They're swallowing whole cities in their rush for power-including Meilin's home. Fed up with waiting and ready to fight, Meilin has set off into enemy territory with her spirit animal, a panda named Jhi. Her friends aren't far behind . . . but they're not the only ones.

The enemy is everywhere.

House of Secrets: Battle of the Beasts by Chris Columbus, Ned Vizzini and Greg Call -(Amazon) Since the siblings' last adventure, life in the Walker household is much improved—the family is rich and the Wind Witch is banished. But no Walker will be safe until she is found, and summoning her to San Francisco brings all the danger that comes with her and puts the Walkers in the crosshairs of a mysterious journey through Denver Kristoff's books. As the Walkers travel from ancient Rome to World War II to Tibet, they'll be tested in ways that cut deeper than before.

Storm: The SYLO Chronicles #2 by D.J. MacHale - No blurb available..