*When I was approached to host a post by Dianne Ochiltree about her book, Molly, by Golly!, I jumped at the chance. I had the opportunity to meet Dianne at a writer's conference several years back and had purchased the book then. I found it a true delight with beautiful pictures, an amazing real life story that I had never before heard, and a great pace and tension set for children. This story won a place in my heart and I gave it 5 stars!- Dorine

Black History Month gives us all a rare chance to meet or become re-acquainted with African-Americans of achievement in history. One such individual is Molly Williams, who was not only the first female firefighter in America but also an African-American living in New York City in the early 1800’s.  Her story, while little known when I found it, was memorable. I’d love to tell you how I ‘met’ Molly and why I HAD to tell her story.

As a writer, I’m always looking for a good idea for “the next book.”
However, some of my best book ideas have come looking for me. 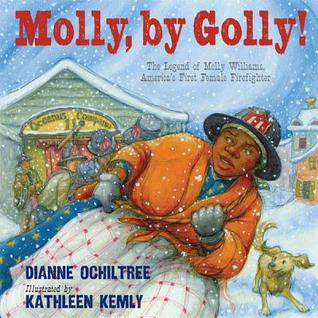 I’d just started research for a book about the 1906 San Francisco Earthquake. Because the disaster had set many parts of the city ablaze, I needed to know about historical firefighting methods. I’d just dug into a stack of reference books and there, on page 42 of Dennis Smith’s History of Firefighting in America: 300 Years of Courage, was my new heroine and work-in-progress:

“While ‘running with volunteers’ is remembered as strictly a male avocation, there were a few highly colorful female exceptions.  One was Molly Williams. She took her work seriously and was proud to be ‘as good a fire laddie as many of the boys who bragged at being such.’ She is best remembered for the night a fire broke out during a blizzard in 1818. Only a few volunteers were able to get through to answer the alarm, so Molly took hold of the drag-rope with them and began to pull on it ‘for dear life,’ struggling to draw the pumper through the virtually impassable snow.”

The drama inherent in her story, and the heroic character reflected by her actions, captivated me immediately. Add in the fact that firefighters ‘run’ in our family, including an aunt who’d been the first woman to work with our township fire department as an EMT in the early 1970’s, and I was hooked! The earthquake manuscript was set aside, and I set out to tell the story of a spunky, strong woman who was not afraid to jump into action when her neighbors needed help.

Flipping to the bibliography page, I noted other firefighting books that might give me more information or sources. I googled websites, contacted fire museums and firefighting organizations, searching for details about Molly’s adventure. I checked databases to find out if there had ever been a children’s book published about Molly Williams. The answer was no.

I’d also discovered that few picture books had ever been published on historical firefighting techniques and tools. Another plus---Molly’s legend could also help kids understand how fires were fought in early America.

From early texts on firefighting lore, such as Reminiscences of the Old Fire Laddies and Volunteer Fire Departments of New York and Brooklyn: Together with a Complete History of the Paid Departments of Both Cities, by J. Frank Kernan, 1885, additional bits and pieces of Molly’s story emerged:

•      Some versions said that an influenza outbreak raged as well as the snowstorm at the time of the neighborhood fire.
•      Molly worked for either John Aymar or Benjamin Aymar who was a volunteer member of the NYC Fire Company No. 11.
•      Molly always wore a calico dress and checkered apron.
•      She was a cook  for both the Aymar family and the fire company, also known as Oceanus 11.
•      The company volunteers nicknamed her “Volunteer No. 11.”

I also sought firefighting experts to help me tell the story with as much technical accuracy as possible.  Two such experts generously gave me their time, expertise and knowledge:  David Lewis, Curator, Aurora Regional Fire Museum, Aurora, Illinois; and Damon Campagna, director and curator of the New York City Fire Museum. These patient souls answered my many questions about firefighting tools, machines, methods, and protective gear that would have been common in Molly’s day.

My friendly, neighborhood research librarian helped track down hard-to-find documents and books. Trips to fire museums gave me a real sense of the size and weight of the picks, axes, and pumper engine Molly would have to handle.

Next, a world had to be built for Molly to live in when she was not fighting fires. What clothing did she and her neighbors wear? What did the houses and streets look like? As I wrote early story drafts, I continued to do research on everyday life in Early America as well as firefighting lore.

With guidance from my editor and fellow critique group members, I kept writing with the goal of telling Molly’s story in language today’s young reader would easily understand, while sprinkling in terms such as ‘spatterdashes’ and ‘johnny cakes’ to give the text the flavor of this by-gone era.

But how to characterize Molly herself? Little was known about her life, apart from her firefighting adventures. Here, I drew upon the many strong women from my own life as inspiration for her courage, strength, tenacity, loyalty and dedication to community service. Their spirit guided Molly’s thoughts, words and action.

Through the long journey from our ‘happy accident’ meeting I’ve always loved ‘my Molly.’ It has been my pleasure to share her story. Not every child will grow up to be a firefighter, but it’s my hope that all those who read about Molly’s legendary tale will be inspired to help others as she did long ago, and as modern firefighters do every day.