Welcome to YA Friday! Today I am reviewing Future Shock by Elizabeth Briggs, a recent release from Albert Whitman & Co. 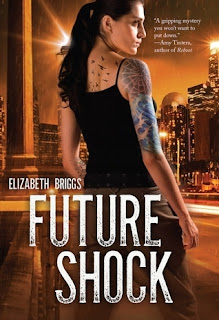 Elena Martinez is on the verge of turning eighteen, and a child of foster care. In just a few months she'll be on her own, and she needs a job, asap. When Aether Corp proposes a brief adventure for tons of money, Elena jumps at the chance. She is recruited for her perfect recall. The other teens in her group, Trent, Adam, Chris and Zoe also have skills. Skills that will be needed when they are sent into the future to spy on technology.

Right off the bat, Elena thinks something is hinky. She overhears scientists talking about problems with a previous mission, and when her group is sent thirty, not ten, years into the future, she knows she's in trouble.

At first, her group works at their goal, discovering future tech, but when they accidentally find out that in the past all but one of them is dead, they decide to do some research. They uncover that the four dead ones all suffered from future shock, a result of time travel that makes you have amnesia and turn crazy. Within twenty four hours of being back in the past, they will be murdered. Can they stop their future?

My Thoughts-
This is a fun sci-fi romp through time and space. From the get go you are sucked into the adventure, knowing that time travel will only bring disaster, like always. When the kids arrive thirty years ahead, they end up in an abandoned building, and the tension just rises from there.

Elena is wonderful, smart and her ability to reason out problems is a plus. Her budding romance with Adam adds a great dimension, especially since the author leads the reader down an untrustworthy path with him. The key to everything really does end up being the relationship between Elena and Adam.

The future is a setting that is familiar, but with enough upgrades to make it seem legit. There are cars that drive themselves, computer generated smartclothes, and my fave, flexi's, tattoo's that actually connect the wearer full time to the internet. Money is no longer used, and products are bought and sold instantly by your scanned ID. The future world created is plausible, and matches up with the information given to the reader about the present times.

I have to give the author kudos for great plot twists and red herrings. Clues are dropped, but the full truth never comes out until the bitter end. Bonus points- because I didn't figure out who the true villain was ahead of time.

This is a great, fast paced adventure with just a touch of romance. I give it 5 stars!