YA time! Today I am reviewing Caravaggio Signed in Blood by Mark David Smith, published by Tradewind Books. 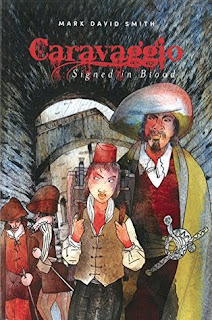 Young Beppo is the indentured servant of a wine barrel salesman in Italy, circa 1606. Treated horribly, he is none the less loyal and does his job. When his corrupt boss is murdered in front of Beppo's eyes, Beppo flees, making him the prime suspect.

Beppo takes shelter with the artist Caravaggio, who himself has killed a man. Together they travel as fugitives about Italy, fleeing the Pope and other nobleman. Beppo becomes Caravaggio's servant/apprentice, learning about painting and art. While handling the artists business affairs, he falls for the daughter of one of the models. Alas, Beppo is an orphan and pennyless. Plus, he is wanted for murder. Will Beppo and Dolcetta have a future? and how will he prove his innocence?

My Thoughts-
Beautifully written in rich historical detail, this book hooked me from the first page. Though I stumbled over the abundance of Italian used, it just added more authenticity to the story. I felt as if I were Beppo living in 1600 Roma. It truly was a feast to read.

I originally decided to read the book because it involved Caravaggio, and being an art history graduate, I just couldn't resist. Wow, the details about Caravaggio are vivid and come to life to tell the story of a volatile man, who lived a life of debasement, but painted gorgeous canvas' that told biblical stories. Be sure to read the author's historical note at the end, it will bring the story into perspective. The title is also a mystery, one you will discover the answer to at the end.

This is not a breezy story, but one that will stimulate thought and idea. An intellectual read that is also adventurous, romantic and thrilling. I'm giving this one a 5!