Welcome to YA Friday! Today I am reviewing a new release from Albert Whitman & Co., Hurricane Kiss by Deborah Blumenthal. 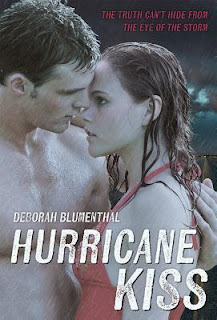 A year ago, Jillian and River shared a kiss, one amazing, passionate kiss. Since then, River went from being the star quarterback to an expelled student sent to juvie. Jillian never knew what happened, and now that he's back, he is different.

Hurricane Danielle is bearing down on Texas, and Jillian is forced by her mother to evacuate with River and his father. The quiet, pill pushing River ignores Jillian, until after sitting for hours in unmoving traffic, he asks her to run back to Houston with him and escape the gridlock and certain death.

Together they make it back to their high school, where they try to wait out the storm, but Mother Nature is not kind, and the school partially collapses and floods. As Jillian and River try to survive, River's own personal nightmare is brought to life, and Jillian realizes that his body and soul both need to be saved.

My Thoughts-
The book is told from both Jillian and River's points of view. The reader is able to understand each's underlying emotions and personal battles. The author does a good job telling River's tale in segments, so that his story is stretched out and the reader has to wait for it. Honestly, that is the reason I stayed with this book. I thought it was going to be a survival story, but really it's not. They hang out in a school and don't face much. The real survival that would happen after the hurricane is only brought up in a couple paragraphs at the end of the book. Plus, they don't have to live through any of it, safe in a hotel.

But, River's story, that was something I wanted to know. The time he spent in juvie is horrifying. What could he have done that would have caused such a punishment? I had to know. The answer isn't anything spectacular, but the corruption, that is another tale. Everything boils down to corruption. The need for revenge in both River and us, the reader, is deep. Which is why I was semi-disappointed in the end. The hero of the tale needs to be the one to stick it to the bad guy. Here, there is justice, but it is in a legal sense only. I needed something a bit more to patch up all the feelings of anger and injustice that the author excellently stirred up.

The writing is good, the characters are both well-written with full fleshed out characters, and the hurricane setting is exciting. Plus, the cover of the book gets a huge thumbs up. It is romantic and sexy at the same time. I would totally pick it up in a book store. So, a mixed-review, but it is worth the read. I give it 3.5 stars!