Welcome to YA Friday! Hope everyone is having a wonderful summer. I haven't been blogging too much as I enjoy my summer reading :) But, today I have a YA paranormal that I picked up on Kindle that I'd like to share, Matefinder by Leia Stone. 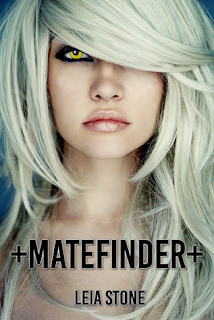 Aurora is one tough chick who survived a violent childhood and now runs a domestic abuse shelter. She gets into a car accident and is saved from death by Kai, an alpha werewolf. As Aurora adjusts to her new world, she learns that werewolves are few in number because they can only have children with their true mates, which are rarely found. She also learns that other paranormal creatures, such as witches and vampires, exist.

As a changed wolf (versus a natural born wolf) Aurora will gain a power with her first full change. To the surprise of everyone, she discovers that not only is she Kai's true mate, but is also the matefinder, a werewolf who has visions that show the location of other wolves true mates. Now Aurora's life is in danger as outside werewolves seek to own her and control her power.

My Thoughts-
I can't seem to get enough of paranormal stories, if they are well written, and this one was. In fact, as soon as I finished it, I purchased books 2 and 3. Aurora is a determined girl who is frustrated to suddenly be placed into an automatic relationship with a male. Her past looms large in her head, and she  can't seem to committ to Kai, even though she knows he is her other half. The situation adds a bit of tension, and the author does a good job in not making Aurora's fears too over the top, which allows the reader to feel that the relationship will work, they just have to keep reading.

I enjoyed Kai as the dominant male that growls, "mine", but allows Aurora all the time she needs. The romance is fun and flirty, without being too intense. In fact, you have to wait until the later books for the sex, and even then it isn't written about. But still, I felt like there was good chemistry and enough passion involved in the story.

The world of the werewolves is well built and brought to life with color. We learn about Kai's pack first. They don't determine things by fighting, but by forcing the submissive to not return a stare. So, it is a bit of a shock when you learn that not all packs are like his, but have continual infighting. I also found it a bit odd that some other packs treated their women as property, especially since women werewolves were semi-rare. You'd think they be treasured, but alas no.

I really enjoyed this book, actually all 3 books in the series. I'm giving it 5 stars.