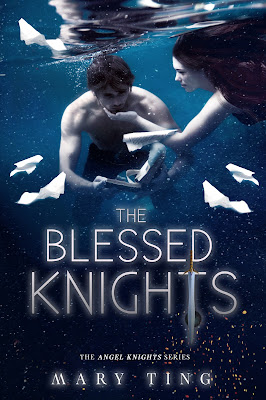 Eli, Lucia's half-demon love interest, has been stabbed with a true-cross dagger and captured by Cyrus, master of the possessor demons.

The Chosen Knights must work together once again not only to save Eli, but also to decipher a clue to find the second missing page of Jacques de Molay's journal. Meanwhile, Uncle Davin informs Crossroads Divine Elders of the danger ahead and learns there is much more to fear.

Countless children are being taken from all over the world to be turned into demons.

Michael, one of the Divine Elders, has no choice but to intervene. The Chosen Knights track down Mortem, the demon who is the key to finding Cyrus, and learn they must travel deep into the pit of a Hawaiian volcano.

When they astral travel to the past in search of a clue and follow Jacques de Moley to Roselyn Chapel in medieval Scotland, what they find will rewrite history.


In case you missed it... Book 1- Angel Knights- a novella 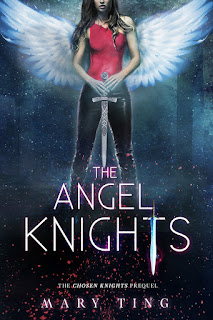 Michael and Claudia’s decision to move back to Crossroads was to keep their children safe, but they can’t escape who they are. Their children, Zachary and Lucia, were destined to be demon hunters—Venators. From the age they were able to hold a sword, they were trained to become the best and to ensure they would become leaders one day.

All is peaceful throughout the land until the Fallen and demons’ presences were felt in the between and on Earth. As the Venators investigate these locations, they will quickly learn how dangerous their lives are. Hearts will be broken. Teammates will lose their lives. And they will face obstacles which will test their faith.

As danger grows, the fear of fallen angels and demons regrouping has the Divine Elders on pins and needles. Now, Zachary and Lucia, along with Uncle Davin, must prepare themselves—mentally and physically—to live on Earth to investigate where the focal point of evil resides before it’s too late.

Excerpt-
Teaser of The Angel Knights (Book 1) by Mary Ting:

“Why, look here, Michael. I caught me another dove.” The Fallen grinned triumphantly. “Won’t the master be proud of me that I’ve killed two more?” His tongue glided across his lips at the same time he caressed my face. I grimaced and jerked my head away. “This one is beautiful. I think I’ll have my way with her and then rip out her heart.” He leaned into me, pressing his face to my hair, and touched my cheek with his. I wanted to throw up.

I shivered, mentally blocking out the vision of his words from my mind. Fear would not take me. I had created my situation and it was up to me to get out of it. Knowing I had backup, my courage grew. The Fallen pierced his dark, devious eyes into mine as if he could reach inside my soul. His brows were thick, nose sharp, and his lips so thin they were hardly there. His ghostly pale skin revealed a long scar running from his temple to his chin on his left cheek.

“Please, let her go. You have me,” I stammered.

“Oh, this one is so brave. What a great combination. Maybe I’ll brainwash her and train her to be on our side.” He hissed at me, showing me all of his abnormally sharp teeth. They appeared as if he’d purposely sharpened them.

My team had gotten closer, but where were Uncle Davin and Zach? Knowing we were outnumbered three to one didn’t give me much hope, but I had to remind myself we were stronger than we thought. Father and Uncle Davin were with us, the greatest demon hunters of their time.

“I’m giving you one last warning,” Father stated with authority.


The Fallen laughed again, mocking Father. “You’re giving me a warning? Let me tell you my name so everyone will remember it when they die. I’m called Mortem…meaning death.” Trailing the dagger down Victoria’s neck, he nicked it. Crimson liquid seeped from the wound, creating a red line down the front of her. “Beautiful. I love this color. I can’t wait to see more of it…on her.” Then, with a wicked grin, he plunged the sword into Victoria’s heart.

My Thoughts-
The Angel Knights is an easy read novella that introduces you to Zach and Lucia, two half human/half angel warriors. You see them basically graduating from their training and being assigned to live on earth in Hawaii. It is a solid introduction and sets things up so that a reader will know how the Venators (Angel Knights) work. You'll also see that the main difference with these Venators is that they are told not to feel emotions. Zach and Lucia are warned not to get sucked into the teenage human world with parties, love and friendship. Yeah right, I haven't read the second book, but I can already guess how that will turn out.

Readers are also shown that demons are breeding with humans, creating many half demon children. Hmm, bet that's going to show up too. Overall, a basic set-up that will introduce you to the world of the Venators. 4 stars.

About the Author-
Mary Ting
International Bestselling, Award-Winning, Author Mary Ting/M. Clarke resides in Southern California with her husband and two children. She enjoys oil painting and making jewelry. Writing her first novel, Crossroads Saga, happened by chance. It was a way to grieve the death of her beloved grandmother, and inspired by a dream she once had as a young girl. When she started reading new adult novels, she fell in love with the genre. It was the reason she had to write one-Something Great.

Giveaway-
CELEBRATE THE FIRST LOOK WITH A GIVEAWAY!
1 Grand Prize: $20 Giftcard to Amazon
2 Runner-Ups: Digital Edition of Any Backlist Title from M. Clarke or Mary Ting