Shadows of Asphodel by Karen Kincy

YA time! Today I am reviewing a YA Steampunk, Shadows of Asphodel, by Karen Kincy. 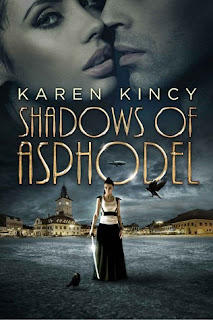 Ardis is a mercenary, she fights where ever the guild of Mages sends her, and knows her way around a war. She also knows it is stupid to rescue anyone off of a battle field, but for some reason she does. It turns out he is a Necromancer, someone who can bring back the dead and control them with his powers. Wendel pledges his life to hers as an offer of thanks. Too bad Necromancers are despised and shunned by the rest of the world.

Ardis is on a quest to find her missing father. All she has left of him is a magic sword and the details of a tattoo on the back of his neck. Strangely, Wendel has a very similar tattoo. Ardis and Wendel grow close, and she is drawn into his world. She grows unafraid of his magic, and learns that he is actually on the run from a murderous assassins guild. Their fates become tied together, and blood and mayhem, with a touch of romance follow.

My thoughts-
This is a fun, steampunk romp through an alternative pre- WWI Europe. Definitely meant for older readers, with a bit of sex. Ardis is a strong female lead, who is often underestimated. She takes it all in stride and gets her jobs done. Wendel used to be a noble, and acts with an air of refinement and knowledge. They are a strong match, and yet sometimes I wished that Wendel was a bit more dominant, just so there was a bigger spark.

The plot is easy to follow and really includes only a sub plot about Ardis's father, which later ties into the main plot. The world building is solid,with great steampunk add-ins. The alternative history is detailed enough that you can compare it to our own history and see where events diverge. This is an easy and fun read that will entertain you with action and magic. 4 stars!

Giveaway- There is a Giveaway going on right now on Goodreads. LINK
Posted by Dorine White at 5:00 AM