It's YA Friday! Shout Hooray! Today I am reviewing the YA fantasy Timekeeper by Tara Sim. 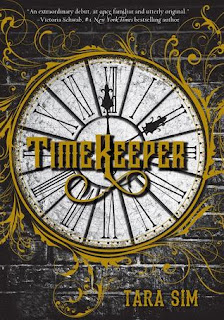 Danny is a clock mechanic in an alternative London where time is an actual entity that can be manipulated or halted. The world is kept moving by the clock towers in each town. If one breaks, time within the town and all its residents freeze.

Three years ago Danny's father, also a clock mechanic, was frozen in a time bubble when a clock tower fell. The art of clock tower building is lost, but mechanics are still trying to build a new one in hopes of restarting time for that town. But, people are protesting and three months ago, Danny barely survived the bombing of a tower. He was left with a physical scar and anxiety attacks. Slowly getting back into the groove of things, he is sent to the small town of Enfield where the town's clock keeps having accidents.

Danny meets Colton, the spirit of the clock tower and something not supposed to exist. The more time they spend together, the closer the two grow, and though being in love with a clock spirit is forbidden, it is too late for Danny.

As more bombings begin to happen, Danny needs to find out what is going on so that he can unfreeze his father and stop the boy he loves from being destroyed if his tower is bombed.

My Thoughts-
I love original stories and this one reached out and grabbed me. The concept that clocks control time and affect the world around them is a brilliant idea. Danny can literally feel the threads of time and when he fixes clocks, he pulls on the threads and resets time for those towns. The novel starts out with a clock that loses its number 2, thus skipping straight from 1 to 3 o'clock. The townspeople lose the hour like it never existed.

To help readers understand this alternative world, the author weaves a back story of folklore into the plot to explain how time was allowed loose. Though the folklore was interesting, I did not find that it needed separate chapters of its own. Maybe an afterlogue?

Now, onto relationships. The two that are central to the story both involve clock spirits and when compared, show the difference between love and obsession. Danny and Colton's  relationship is the one detailed in the story. It is very innocent and grows as both boys figure out their feelings. So warning ** same sex relationship** notice. The other relationship probably started out the same way, though man and woman, but it warped and grew dark.

The entire bombing theme is the mystery of the novel and the thread that ties everything together. As Danny puts together the pieces, the relationship story grows and finally explodes into a dramatic ending where only one will win.