Welcome to YA Friday! Today I am reviewing Future Threat by Elizabeth Briggs. In fact, it's been a year since I reviewed book one, Future Shock. 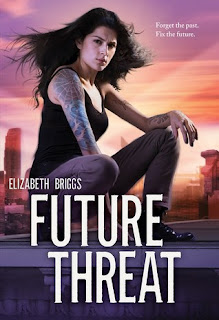 So, this book takes place six months after book one, Future Shock. Elena, Adam and Chris are trying to get on with their lives, and the money they received from Aether Corp is definitely helping, but Elena can't shake the feeling that the corporation is not done with her yet. Her relationship with Adam is strong, although she still feels as if he should find somebody better than herself.

One morning, a black car arrives out front of Elena's apartment, and voila, Aether Corp is back. They want Elena, Adam and Chris to go back to the future. A future where another crew of teenagers from Aether have gone AWOL. One of the missing is Aether Corp's CEO's son, Jeremy. Drugged and sent against their will, our trio find themselves in an even more advanced future than before, a future where Aether Corp is leading the way in technology. The problem, someone is killing the people on the missing team's crew, and Elena's group is next.

My Thoughts-
At first I wasn't sure how the author would pull of another trip to the future, but she does a great job at making it more about the characters, than the technology. There is still cool stuff, but with the threat of death hanging over Elena's head, the reader is drawn more into the mystery of who or what is tracking them. Plus, it turns out they go into the future twice and both outcomes are completely different, which is fun, because it means someone is changing things.

As a reader I keep wanting to smack Elena because she keeps holding Adam at arms length. Their entire relationship goes through the ringer in this book and I am happy to say the author brings their romance to a good point in the end (though who knows about book 3).

Now, the real thing I would love to talk about, but won't because it would spoil the book, is who is doing the killing and why. As you read, you are pulled through different scenarios, but all with similar outcomes, someone dies. Each time you hope they've figured it out, and bam! nope. So, kuddos to the author, because in the big reveal she totally got me. Yahoo!

This series has so far been a fun read. I'm giving book 2, Future Threat, 4 stars!