Welcome to Middle Grade Monday! Today I am reviewing a new release from Sourcebooks Jabberwocky, Frederik Sandwich and the Earthquake that Couldn't Possibly Be by Kevin John Scott. Please check out MMGM central at Always in the Middle. 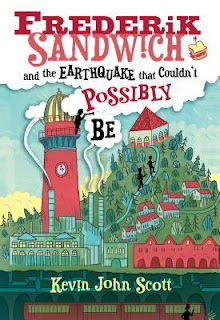 Frederik Sandwich, though born in Frederik's Hill, has felt like an outsider his entire eleven years. Because his parents are foreigners, the kids tease him and treat him like an outcast. The only other person treated that way is Pernille, the young girl with olive skin and pure white hair.

Frederik always obeys the rules hoping to fit into the crowd. Pernille does the opposite, breaking all the rules. When an earthquake hits their town, everyone refuses to admit that they even felt the earth move, all but Frederik and Pernille.

Together they decide to find out the truth. They discover a long forgotten railroad line, underground water pipes, secret doorways, and a plot to assassinate the major. Can they save their town, the major, and stop the earthquakes?

My Thoughts-
This book cracked me up. From the get go it is just hilarious. The absurdity of all the rules, all the kids named Frederik, and Pernille's bizarre logic and adventure hero characteristics. At every turn the author throws in a phrase or situation that is absurd. Even all the letter I's in the book are written upside down.

Frederik and Pernille are quite the duo. They play off of each other perfectly. Somehow, in all their misadventures, they actually figure out the truth. The major is really a bad person. Now, here is where I had a problem. Thirty years ago an incident occurred caused by the major. She had the railroad closed, accused someone of attempted murder, and basically took over the town. BUT the author never tells us what exactly happened. UGH! Plus, the book ends with our duo finding out that the major is a bad lady, but there is no resolution on how to stop her and bring her evil deeds and bigotry into the light. I wonder if there is perhaps a second book coming? That would help solve the issue, but I don't have a clue. I'll cross my fingers, because this hilarious book really deserves a chance.

Kids will enjoy the antics of our super duo. The weirdness of the characters and the towns absolute adoration of the major and following the rules will give them pause for thought. I'm giving this book  4 stars!
Posted by Dorine White at 5:00 AM