Ya Friday brings us to another awesome book, this one is Grounded by GP Ching. Let's take a look: 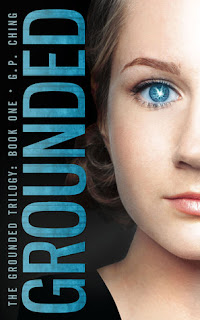 Lydia lives in Hemlock Hollow, a world hidden behind a wall and forgotten about by the surrounding world. Inside they live an Amish type life with no electricity and strict rules. Outside the wall, the world is dissolving. People fight for electricity and control of other people. Lydia is content in her life, happy to spend time with her beau Jeremiah and do her chores. But when her father falls ill and needs to be taken outside the wall to receive medical treatment, Jeremiah convinces Lydia to take rumspringa, a year of time when you can join the outsiders and live among them before deciding for yourself what lifestyle you wish for your future. With a fake name and papers they head out, hoping to visit her father in the hospital.

Things don't go smoothly. At the half point house, Lydia is shocked by a jolt of electricity from a lamp. When the authorities come to investigate, she is arrested by the Green Republic, the ruling government in the new world. Turns out she has the ability to harness and control electricity, a rare ability she inherited from her parents, who were experimented upon. The Green Republic will do anything to possess her and replicate her powers. While escaping prison she frees another inmate, Korwin, who turns out to be just like her.

Now, they are on the run, wanted for the powers they possess and not knowing who to trust.

My Thoughts-
What drew me to pick up this book was the idea of an Amish teenager with the ability to control electricity, two at odd topics. I wasn't disappointed. The book starts in Hemlock Hollow and the reader is able to see how the people live their lives, follow their rules and find joy in simplicity. Then, we go outside the wall into a semi post apocalyptic world. Now we see the exact opposite. Society run amok with people who will do anything for power and control of the electric grid. It is a great juxtaposition.

Lydia does not disappoint as a character. She does what needs to be done. In prison she is taught to fight, both hand combat and weapons. She learns to assert herself and take control of a situation while still trying to keep her core values intact.

There is also a love triangle, and I have to say, I felt really bad for Jeremiah. He loves Lydia and has her back the entire time, but because of chemistry with Korman, Lydia pulls away from him and towards her fellow electricity sparker. Both relationship are understandable and make sense, I just felt bad for good ole Jeremiah.

Overall this is a fun adventure and a look at a different type of dystopian world. I thought the ending wrapped things up nicely and I was content. The fact that this is book one in a trilogy surprised me because it seems to already tie things up so well. I am giving it 4 stars!