This Heart of Mine by C.C. Hunter, plus GIVEAWAY

Don't forget to enter the giveaway for Once Upon A Princess

YA Time! Today I am reviewing This Heart of Mine by C. C. Hunter, a new YA contemporary romance. 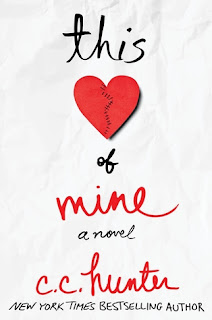 Leah MacKenzie carries her heart around in her backpack, literally. Waiting for a donor, her pump machine is the only thing keeping her alive. Stuck at home, she gets schooling via tutors, and one lucky day Matt (her long time crush) subs. With a goodbye kiss on her lips, she hopes he'll call her back. However, the next time she sees him is after she has received a heart transplant, and it was his twin brother's heart!

Now Leah and Matt are drawn together not only by chemistry, but by a desire to prove Matt's brother did not commit suicide. Matt just knows he didn't, because they were twins and he felt it happen, and Leah knows he didn't because after receiving the heart she's been having visions.

When nobody will believe either of them, they seek out the proof for themselves, but it could leave them just as dead as Matt's brother.

I can't say it's that original of a story. Transplant patients that either have visions of the donor or become possessed by the donor are common, but adding the double visions that the twin brother sees is a step toward uniqueness.

However, about half way through the story you figure out who did it. As soon as the character appears in the story it is an obvious plot twist.The tension went down after knowing who the killer was, and I wish it had been something less obvious  After that, I just wanted to see how the author was going to get the proof to convict the guy.

It's a very well written story that tugs at your heartstrings. The very beginning, Leah with her backpack, is done perfectly. Leah's feeling of despair, but acceptance are brave.  I especially like that the author had personal reasons to write the story. The romance between Leah and Matt is the best part. It is a sweet story that builds despite the pressure placed upon the couple. I liked seeing the two of them together, but the best part is that they both secretly liked each other long before the heart issues. Plus, when Matt first kisses her when done tutoring, you really feel just how special that one moment in her life is. I'm giving this book 3.5 stars! And can I just say- love the cover! They don't even use the word heart. They just have an image of a stitched up red heart.