Hi everyone, welcome to Middle Grade Monday! Today I am reviewing Aru Shah and the End of Time (Pandava Quartet #1) by Roshani Chokshi, a Rick Riordan Presents book. Don't forget to check out MMGM Central at https://gpattridge.com . 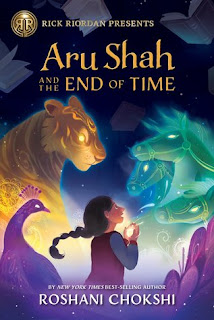 Twelve year-old Aru Shah lives with her mother in The Museum of Ancient Indian Art and Culture. She is really good at making up stories, so when her schoolmates take off on jet setting vacations while she'll be stuck at home, she tells everyone she's going to Paris.

Everything would have been fine, if she hadn't got caught in her lie. To prove she is cool, she tells her classmates that she will light a forbidden lantern within the museum. Curses are just mumbo jumbo, right?

Not in this case. With the lighting of the lamp a long hidden evil is released and the world around Aru freezes while The Sleeper begins to rampage the world. She is told by a mysterious bird that she is actually a descendant of the Pandava Brothers, ancient heroes, and that her and another descendant must save the world. Easy Peasy, right? Nope, to begin with she must find the reincarnations of the five legendary Pandava brothers and journey through the Kingdom of Death, and then the real battle begins.

My Thoughts-
Great Book! I loved reading about Hindu traditions and culture. Aru Shah is a fierce character with a major flaw, she lies. The other descendant she is chosen to work with, a girl named Mini, is also flawed. She not only has anxiety and is a hypochondriac, but it was her older brother that is the hero of her family and was supposed to go on the adventure. These two, flawed and funny girls take on the world. Loved it!

I have to give the author kudos for creating a character that I felt angry with, Aru's mother. This women seems to ignore Aru, not even giving her the time of day. The reason Aru lies about Paris is because her mother actually says she'll take her, but then, as has happened many times before, she cancels. I felt so sorry for Aru, alone in a big museum, with no real friends and a mother who seems to be off on big missions, but is failing at her most important mission, being a mother. Huge empathy points for Aru!

As with all good quest stories, this one includes having to find mysterious objects under a deadline. Our heroines not only unravel riddles and conquer friendship issues, but they battle The Sleeper, some Hindu minor deities and discover their true potentials. This story is a real good time, with fun characters, great history and colorful scenes. I'm giving it 5 stars! I can't wait to see where this series goes.