The Memory of Forgotten Things by Kat Zhang

*Enter to win a SIGNED copy of  the YA thriller- Surface Tension by Mike Mullin!*

I have a fantastic middle-grade read up for review today, The Memory of Forgotten Things by Kat Zhang. This is a good one folks, so sit back and enjoy. Don't forget to head over to MMGM central to see what other great middle-grade is out there- https://gpattridge.com/ 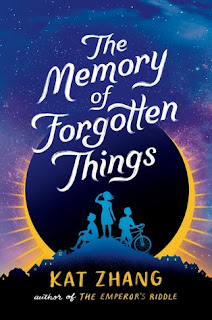 Sophia's mother died when she was six, but that's not what some of her memories tell her. Instead, Sophia has sudden memories that involve her mom baking a birthday cake when she turned ten, or encouraging Sophia to sing a solo in the school choir at twelve. Sophia keeps her Memories a secret, holding on to them as tightly as possible.

Then she gets put into a group project with DJ and finds out that she's not the only one who has memories of events that never happened. DJ has a sketchbook filled with drawings of the man who SHOULD have been his stepfather, but doesn't actually exist. As they work on their science project about solar eclipses they find out that they were both born on the same day, in the same hospital, during the last partial solar eclipse. Could their birth make them special? Could they perhaps be able to see into an alternative universe?

With the Totality eclipse coming up in just days, Sophia and DJ are both determined to find a way to cross into their alternate universes and live the lives they believe they were meant to have. But, what will happen to the world they leave behind? Will they simply switch roles with their other selves? What if everything is not as perfect as they think it will be? Will they be willing to pay the price for the switch?


This is a fabulous story with a slight fantasy/science twist. I found it heartwarming that Sophia had memories of her mother existing even after she died. How special would that be? The hole that was left by her mother's death has a way to heal. Sophia's character is great. She is brave and courageous and ready to believe in the what ifs of life. Her determination is what allows herself and DJ to piece together the mystery of their birth and find other people that might have clues about alternate dimensions.

The idea of alternate dimensions is easily written into the story in a way that seems natural and not all mumble jumble. The actual idea that there could be a thinning between worlds is plausible and as you read it makes sense to the plot. Though the fantasy/science aspect is there, I found the book really to be about heart and soul. You care about Sophia and her mother. You feel Sophia's desires and fears and when the unusual happens, you cheer for her and don't think of it as being unrealistic.

The truth is that everything comes down to what happens when Sophia actually crosses over. She finds out that life doesn't run in predictable patterns. The realization that she might have to trade something for getting her mother back becomes a stark reality. Which life is really better? I was so thankful that the author went ahead and fulfilled Sophia's desire, to cross over and spend time with her mom. At the same time, the author does a fantastic job of letting the reader see how that world is not the one Sophia belongs in and after several precious days, gives her a choice of whether to stay or go home.

I enjoyed this read so much. It was heartwarming, but with a slight mystery to engage the curious. I'm giving it 5 stars!