Welcome to YA Friday! Today I am spotlighting the first two books in the Time Zero Trilogy by Carolyn Cohagan. So first, book one- 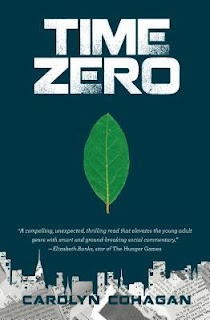 Mina Clark lives in a future Manhattan that is surrounded by a large wall to kept the Apostates out and the believers safe. Life is control by energy and water, the more you have, the wealthier you are. Women are counted as property, forced to observe severe religious rules like wearing capes, veils, and arranged marriages. They aren't allowed to read or write. They are observed by Twitchers, policemen that will beat or zap them for any infraction.

One day Mina is rescued from a male riot by Juda, a young man who works for one of the wealthiest families in town. They form an immediate, illegal bond. At Mina's marriage negotiation, they meet again, when Damen, Juda's employer's son, decides he wants to marry Mina. Of course, it is only after her mother catches Mina's cloak on fire, severely burning her, but allowing all the men to see her hair and face.

Contracted to marry Damen, but with feelings for Juda, Mina faces a crisis of all she believes. Can she follow the will of the prophet? Add to that the secret fact that Mina's grandmother has been teaching her to read, and the seeds of rebellion are set.

A good dystopian view of a severe future where women are suppressed. Actually, it seemed like A Handmaid's Tale at the YA level to me, but with Islamic values instead of Gilead values. Still, it was a good read. I enjoyed following Mina's path to rebellion and her budding love for Juda. What honestly kept me reading was the hint that Mina might somehow escape from behind the wall (yes, a little like Divergent).

I felt like the author took the worst things about many religions and grouped them all together, which makes for a horrifying look, but also negates all the good things of religion. That said, horrifying does keep a reader turning the pages. The book is well written, with interesting characters and a plot that keeps you reading. I'm giving it 4 stars! 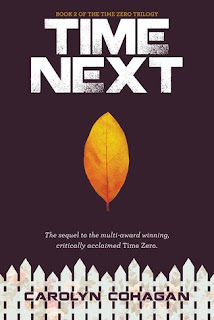 Let's take a look at book 2, Time Next. Don't read if you don't want spoilers before book one. So, Mina, Juda, and her group escape from the Wall, and now find themselves it what seems like the modern world. Track houses, electricity, food, malls, and freedom. But, once again, this group is ruled by their own prophet/leader. We see another form of religious oppression, but this one feels like freedom to Mina, but with the cost of being separated from all her friends.

To stay in this new location, Mina is asked to believe that her old world was full of lies. She finds this hard to do since she believed in her original prophet. I felt this an odd thing because she just left a place full of anger, hatred and repression, but somehow she is shocked when told that it wasn't true. Anyway, now she is a puppet of this new leader, one who thinks Mina and her group, the Manhattan Five, are the answer to prophecy. Get ready for a whole new ride. I love that the author now takes a detour and new view at the same old problem. 4 stars!
Posted by Dorine White at 9:42 AM