Charlie Hernández & the League of Shadows by Ryan Calejo

*Are you an author or illustrator? Check out my new book- How to Build Your Author Platform

Welcome to Middle Grade Monday! Today I am reviewing a new release from Simon & Schuster Children's, Charlie Hernández & the League of Shadows by Ryan Calejo. 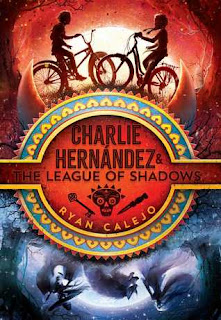 Charlie Hernandez's world has turned upside down. His parents are missing and horns are growing out of his head. Say What? Could the Latin American myths that his abuela told him about actually be real?

He is placed in a foster home with weird Mrs. Wilson, an old lady that collects dolls. During middle school, Charlie does his best to hide his freaky outgrowths, including feathers and a lobster claw, but the school reporter, Violet Rey, uncovers the truth. Now she is sticking to him like clue as he tries to find out the mystery of his missing parents.

The truth ends up being stranger than fact, as Charlie and Violet begin encountering mythical creatures, some good and some out to get them. From El Cadejo, a supernatural dog that protects men to La Sihuanaba, a cursed queen that kills.

Charlie is thrown into an age old war between La Liga (The League of Shadows) and La Mano Peluda (the Hairy Hand).  La Liga hopes that Charlie is the fabled Morphling, a being prophesied to come and save the world from darkness.

This middle grade book is a great intro into the world of Latin American myths and legends. Almost every chapter finds Charlie meeting something new, and he retells the story of the myths to Violet. You meet strange creatures with dark fates, plus a few good ones, like the Queen of Toledo, a witch who leads the League. At some points, I was a bit overwhelmed by just how many myths came flying my way.

That being said, the quick introductions of mythical creatures leaves the story going at a fast pace, adventure and struggles building upon each other. Kids will love the fast flow. Sometimes I found the characters seemed to be a bit older than middle school. Violet mentions taking AP Pre-Chemistry, which seems more high school, and the bully that picks on Charlie is way mean and seems to play sports at a varsity level. These mentions would throw me out of the story at times as I tried to picture these kids doing such advanced stuff.

Can I just say that the ending took me by surprise? I had no idea who the real villain was pretending to be. Creepy. I'm liking where this series is heading and I love the multi-cultural aspects. The book concludes with a mythical creature glossary so that you can figure out who is what. I'm giving this one 4 stars!

About the Author-
Ryan Calejo
Ryan was born and raised in south Florida. He teaches swimming to elementary school students, chess to middle school students, and writing to high school students. Having been born into a family of immigrants and growing up in the so-called "Capital of Latin America," Ryan knows the importance of diversity in our communities and is passionate about writing books that children of all ethnicities can relate to. This is his first novel.