Welcome to YA Friday, today I am checking out a kindle deal I found, Flightless Bird by Kellie McAllen (The Caged Series). I actually bought the entire series and enjoyed it, but here I talk about book one and the overall series arc.
The Story- 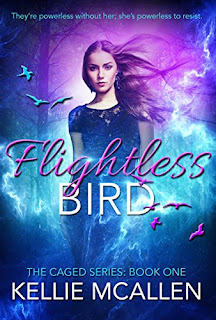 Lexus lives with her drunk mom while her dad is in prison. She is looked down upon by the other kids in school, considered white trash. She is comfortable in her role, until the twins, Griffin and Phoenix show up. They are both instantly attracted to her, and when they touch, electricity sizzles.

Students at school can't understand how Lexus ends up hanging out with two hot boys, but they still tease her anyways. Griffin and Phoenix can't stand how others treat Lexus, and Phoenix, the more physical twin, makes it his business to defend her.

Things aren't easy for Lexus, she is falling in love with both boys, and the chemistry they spark is shocking. Weird really happens when Lexus is able to somehow fuel both the twins with her electrical zaps and get them to move things and do mind control. What is happening? And whom should she pick to date?

Pretty much the first reverse-harem I have read on a YA level. So, fair warning. Together Lexus, Griffin and Phoenix make a power triad, and as she finally figures out, why choose just one? The whole angst of the book builds until she finally gets that answer, and it works out pretty well. The ages are too young, she is 15 and the boys are 16, which made me uneasy. In other reverse harems at least the couples are 18 and are making adultish decisions. Here, however, Lexus is a newbie, who has no experience with guys. perhaps if it had remained just making out, but once she sleeps with one of them it goes to the higher level of uncomfortable. I would have liked to have seen this with older characters.

The overall story itself is a good one, though not too unique. Kids with superpowers who are being trained in a school, lead by a corrupt headmaster, who have to revolt to save the day. Enjoyable, fun story, with some nice tension and quirks. I'd recommend for older readers, so I'm giving it 4 stars.