I love Middle-Grade Mondays! Today I am reviewing the true story of the Thai cave rescue, Rising Water by Marc Aronson. 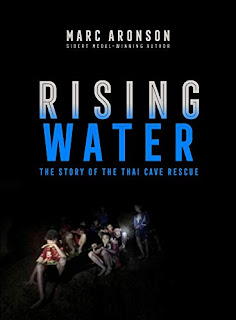 On June 23, 2018 , twelve young members of the Wild Boars soccer team in Thailand, along with their assistant coach, went cave exploring. Inside the Tham Luang cave system they advanced down well worn paths heading toward adventure. Unknown to them, during the few hours they were inside, an early storm hit and flooded the entrance and several of the interior chambers. When they tried to leave, they were trapped. Stuck in a far chamber of the caves, there was no way to get through the tight spots that were now completely submerged.

No one knew they were missing until that evening, when parents began to wonder why the boys weren't back from their day trip. Soon a nation was on alert and a rescue mission began. Only, even professional Scuba divers and SEALS, could not force their way through the narrow passageways to find the team.

This is the story of the journey to rescue these boys. An International endeavour to save the team from death. It wasn't until July 2, that they were even reached, and then it was several more days until a plan to get them out could proceed. Day by Day, attempt by attempt, this real life drama unfolds.

My Thoughts-
Amazing! The author, Aronson, does an amazing job digging through information from all the rescue crews and political press releases. He produces a timeline that sheds light on who did what, when, and without bias. The story of the rescue is incredible and the real life photos and maps allow the reader to follow along and see the real people involved.

I was obsessed as I read. The rescue path seemed impossible, and as more and more rescue crews from all over the world came to the same conclusion, I was sure this book would end in tragedy. That's right. I did not know the facts in advance! This book opened it up to my mind.

As a reader I learned about the individual scuba divers and what they went through to even enter the main cave system. Next, finding where the boys were, and if they were even still alive was a whole nother task. Then, how do you get twelve boys and a coach out when there are several miles of underwater passages? This is an incredible story that is a testament to international love. It ends with the author's plea to realize that we need one another. 4 stars!