Welcome to Middle-Grade Monday! Today I am reviewing a new release-  The Red Rover: Origins by C.E. Whitaker III. 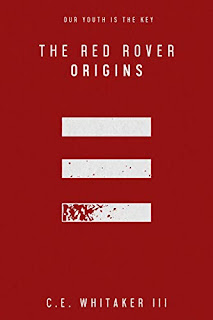 The Red Rover: Origins is an exciting adventure centering around seven thirteen-year-old space cadets who live aboard Red Rover Base Alpha, a giant space station that left earth decades prior to search for a new home. Orion and his classmates are taking part in their final exploration training before they will be allowed to be part of an official Rover team that searches for inhabitable planets.  While on their adventure on the planet Cnaeus, things take a strange turn and they are forced to band together and survive.

My Thoughts:
The plot of the story is fun an exciting, however, there are certain issues I had that pulled me out of the story. First off, this is a middle-grade book, however, the first quarter of the book is a set-up jumping into many adult POV's to help explain Red Rover station and the work they do. It isn't until the 40% mark that the book finally settles mostly on Orion's story. I was not sure who the main character was until that point and wondered what age group this book would settle into. It was marketed as YA, but with the lead characters being thirteen, it is MG. Mechanic wise there are often slips mid-sentence between tenses and I would end up re-reading certain lines. However, the story was really getting involved and I wanted to see what was going to happen, so I kept reading. I hit a bump when it is casually brought up that a father is raping his thirteen-year-old daughter. I expected some outrage on behalf of the characters, but they just took it in stride. I felt this too much for MG.

Then things flip into overdrive with destruction and mayhem rain down.  The ending of this book, which provides the course for the next, is intense. Our group of teens ends up facing off against a dark universe, but hope lies ahead. I certainly had some issues, so my rating just hits 3 stars.