Check out this new release Middle Grade- The Amelia Six by Kristin L. Gray. On sale June 30! The publisher is giving away one copy! To enter fill out the rafflecopter form below.
The Book- 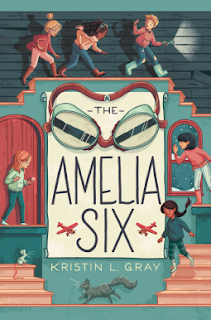 Amelia Ashford—Millie to her friends (if she had any)—feels beyond lucky to be awarded the once in a lifetime opportunity to spend the night at Amelia Earhart’s childhood home. But when Amelia’s famous flight goggles disappear, everyone in the house is a suspect. Fingers are pointed in all directions, and then someone falls strangely ill.
With a blizzard raging outside, Millie and the five other girls staying at the Earhart house—all nominated for this opportunity because of their exemplary curiosity and creativity in STEM—band together to find the culprit. It’s up to the Amelia Six to return the goggles to their rightful place. Or the next body to collapse could be one of theirs.

The Author- Kristin L. Gray
Kristin is the author of VILONIA BEEBE TAKES CHARGE, a 2018 Bank Street Best Children's Book. She lives in Arkansas with her family, two dogs, one cat, one fish, and an alert bearded dragon, who is clearly NOT a dragon as he has never once breathed fire. KOALA IS NOT A BEAR is her first picture book. Visit her at kristinlgray.com. 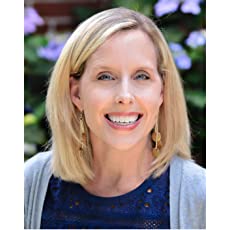 What made you want to write a book about Amelia Earhart?

Like a lot of young girls, I first learned about Amelia Earhart in grade school. But the mystery surrounding her disappearance has captured the world’s attention now for nearly one-hundred years.

But there is much more to Amelia than her trailblazing historic flights and fight for women’s rights. A line in The Amelia Six says, “people are like cake; they have layers.” This holds true for Amelia. She was an author and poet, an editor at Cosmopolitan, a seamstress and designer of women’s wear with a line of luggage in department stores. She was one of the very first celebrities to receive corporate sponsors. She taught at Purdue University, consulted for Hollywood, worked with immigrant children in Boston, was a nurse’s aid, a pre-med major, and at one time, she drove a gravel truck. There was nothing she would not do or try, if she put her mind to it. So when I visited her grandparents’ home on the bluff in Atchison, Kansas, where she spent much of her childhood, my mild interest became fascination, and a cozy mystery was born.

I spent several years studying, reading, and writing picture books while my children were young. As luck would have it, though, my longer work was picked up first.

I took the opening pages of Vilonia Beebe Takes Charge, what would become my debut middle-grade novel, to two writing conferences for feedback. One was a local SCBWI conference, and the other was the Andrea Brown Literary Agency’s Big Sur Writing Conference set in beautiful Big Sur, California. There, I was lucky enough to be assigned to Caryn Wiseman’s roundtable. Caryn simply got Vilonia’s heart and humor from those early pages. That was a huge boost to me as a writer, to have an industry professional connect with my work. I returned home and finished drafting. Thankfully, Caryn still loved the manuscript a WHOLE YEAR later and—joy—connected to a couple of my picture book texts. To say I was over the moon is an understatement.

So much of publishing is waiting and more waiting, revising and more revising. This is why it’s a good idea to have projects in various stages, so while you are waiting on notes for one project, you are also drafting something new. I’m still finding this balance, and not everything I write works out or finds a publishing home. But the longer I’m on this journey, the more I realize that is part of it, too. I’m thrilled The Amelia Six wound up with the same team who published Vilonia Beebe.