I've got a great book today! Did you do jump rope or double dutch in school? I know I did. Here is a new release by Joy Jones entitled Jalya Jumps In. I  hope you enjoy meeting the author and learning more about her book. It goes on sale tomorrow, Sept. 1. 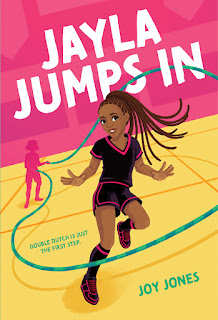 When eleven-year-old Jayla finds out that her mother used to be a Double Dutch champion, she’s stunned. Her mom, who’s on doctor’s orders to lower her blood pressure, could move like that?!? Jayla decides to follow in her mom’s footsteps, thinking that maybe double Dutch can make her stand out in her big, quirky family. As she puts together a team at school and prepares to compete, Jayla finds that Double Dutch is about a lot more than jumping rope―and it just might change her life in ways she never imagined. Full of hilarious family dynamics and plenty of jump rope action, Jayla Jumps In follows one girl's quest to get her mom healthy and find her place in her community.

The Author- Joy Jones
At the age of 63, I, a black woman, got sent to Russia - to jump double Dutch. What? Well, I started a double Dutch team for adults and in 2018, DC Retro Jumpers was invited to be cultural ambassadors abroad. Now double Dutch has taken me on a new journey. I’m pleased to announce my first novel for kids. JAYLA JUMPS IN (Albert Whitman & Co.) is about - can you guess? - a girl who starts a double Dutch team.

Joy Jones is a trainer, performance poet, playwright and author of several books including Private Lessons: A Book of Meditations for Teachers; Tambourine Moon, which was selected as one of the best books for children by the black caucus of the ALA and featured on the Bernie Mac Show; and Fearless Public Speaking. She has won awards for her writing from the D. C. Commission on the Arts & Humanities, and the Colonial Players Promising Playwrights Competition, plus awards from both the D. C. Department of Recreation & Parks and the D. C. Commission on National & Community Service for outstanding community service. 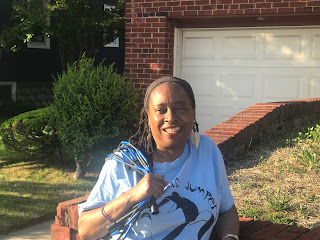 Joy Jone’s provocative op-ed on marriage trends for The Washington Post, “Marriage is for White People”, went viral. She is the director of the arts organization, The Spoken Word, and the founder of the Double Dutch team, DC Retro Jumpers, which has led exhibitions and classes throughout metropolitan Washington and abroad. Joy often leads workshops on creative writing, communications, and black history.

The Interview-
1. I would love to hear about your Double Dutch experience and traveling to Russia!

I think God has a sense of humor. I started DC Retro Jumpers in 2004. By 2017, some of the sparkle had gone out of double Dutch for me. I still enjoyed it, of course, and got together with my team members to do demos from time to time, but anything you do for over ten years gets a bit tiresome. Then in October of 2017, the Washington Post did a feature story about the group. It was noted by a woman who organizes cultural exchanges of artists to other countries. Double Dutch appealed to her because it’s inexpensive, requires little equipment, is extremely portable and easy to learn. She called and asked me if I would like to be a cultural ambassador.  All of a sudden, my enthusiasm was renewed.

One year later, we were in Russia!

We visited three cities: Moscow, St. Petersburg, and Belgorod, a small town in southern Russia. Our first exhibition was at the US Embassy in Moscow. We started the evening off in cocktail dresses, then changed into T-shirts and sneakers to jump rope. There was a Russian jump rope exhibition team who also performed; four young and fit men and women. They did some impressive acrobatic moves. That wasn’t us. The DC Retro Jumpers team members who went to Russia are all over fifty years old and our moves are pretty basic. But what makes us unique is we make the audience the star of the show. After doing our stunts, we invite the audience to jump. Five minutes of instruction - and middle-aged women who had never learned how, grandmothers who hadn’t jumped since they were girls, boys who want to get in on the action, and men who want to take up the challenge discovered they can do it, too. If you have feet, we can get you in the rope.

Russia and the United States are not exactly BFFs. War & Peace. Boris & Natasha. Accusations of interference in the presidential election. These were my primary reference points. These associations led me to have a pretty grim and dim expectation of the country. But Russia was lively and colorful. Encountering the wonderfully unexpected became the expectation. Despite its recent Communist past, Russia has a long religious tradition. There were many ancient churches with their distinctive onion domes, most notably St Basil’s Cathedral in Moscow’s Red Square. Russia is also culturally contemporary; hip hop is hugely popular.

Russians appreciate art. Here in Washington, DC where I live, the subway system is modern and utilitarian. In Moscow, their subway system was modern and utilitarian, too but attention to artistic elements were also incorporated into its design. As we were rushing through a subway station, I was surprised to see the bust of a man prominently displayed. “Who is that?” I asked. It was Vladimir Mayakovsky, a famous Soviet poet from the mid-twentieth century. I liked the idea of being greeted by the image of a poet as part of my commute.


2. How can kids get involved with Double Dutch today?
Jumping rope is so simple! A rope is easy to come by and if you can’t get a rope, go to the hardware store and use a clothesline. Double Dutch is a bit more complicated than jumping single and requires more people - but as a result it’s a lot more fun. You can learn how by watching a video - check out the one I made at: https://photos.app.goo.gl/sNfsqZ8tDo1WCtVR9

But the best way is to have someone who already knows how to show you how to jump. If you’re in the metropolitan DC area, DC Retro Jumpers gives exhibitions year-round. Find out what we’re doing at www.DCRetroJumpers.com.

3. What was your journey like to get this book published?
Many of my best blessings come to me in an unexpected direction. (Did I mention that I think God has a sense of humor?) Some years ago, I had written a play, Outdoor Recess, about a woman who starts a double Dutch team. In promoting my play, someone suggested that I actually gather together women who wanted to jump, so I did. That gathering eventually became DC Retro Jumpers, which got a fair amount of publicity and as the founder, I was always speaking on behalf of the group. One day, my agent said that double Dutch would make a good topic for a kids’ novel. My first thought was that between the play and the organizing and promoting of the team, I had said everything I had to say about double Dutch. But her idea lingered and I decided to pursue it. The first editor I pitched it to said yes! The result is Jayla Jumps In.

4.Do you plan on writing more kidlit?
Absolutely! I have several books out already for young people. Last year, my how-to for teens was published called Fearless Public Speaking. I’m currently pitching Sound Is Ready, a kids’ biography on Russell Williams, who won two Academy Awards for sound engineering for the movies Dances With Wolves and Glory. And I’m working on a MG novel about a boy who gets put off the school bus and - horrors! - has to walk home from school every day. The daily walk home changes his life. The working title is Walking The Boomerang.