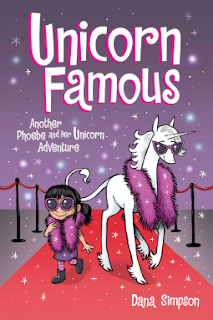 When your best friend is a unicorn, every day is a stroll down the red carpet. Phoebe Howell’s unicorn BFF, Marigold Heavenly Nostrils, is happy to provide the celebrity treatment—teaching Phoebe fancy new spells, giving her a ride to school so she doesn’t have to ride the bus, and even negotiating with the tooth fairy on her behalf.

But when Phoebe starts noticing that unicorns have become a trendy fashion statement, she doesn’t feel quite so unique. Fortunately, she’s distracted by adventures including a visit to the unicorn community and a trip to the woods to see her friend Dakota receive an unusual honor at the goblin award ceremony. Unicorn Famous is filled with amusing examples of the extraordinary lengths friends will go to make each other feel special. 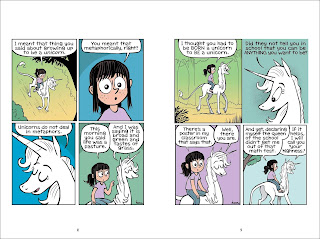 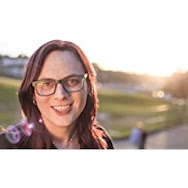 Dana Claire Simpson grew up in Gig Harbor, Washington, drawing the entire time. She eventually graduated from The Evergreen State College, despite having spent all her time drawing, and not always for credit.

Attempts at doing real work along the way are hardly worth mentioning; the relevant fact is that, from 1998 to 2008, she drew the internet comic strip "Ozy and Millie." After winning the Comic Strip Superstar contest in 2009, she developed the comic strip "Phoebe and Her Unicorn" (originally known online as "Heavenly Nostrils"), currently syndicated in nearly 200 newspapers.

She currently lives in Auburn, Washington, with her tech genius husband and her fairly stupid cat.

Check out Book One