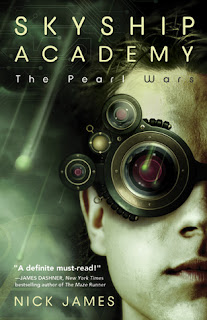 Skyship Academy- The Pearl Wars is a 376 page YA fantasy novel published by Flux and written by Nick James.


The Story- The world has been devastated by wars, now people live in one of three places; above the land in skyships, on the surface in protected cities or out in the wastelands called the fringes.
The only saving grace is the discovery of Pearls, small orbs that fall from the sky and contain enough power to run a city for three months.

The hunt for the Pearls causes friction between the skyship people and the surface dwellers. Jesse Fisher, a skyship agent in training and Cassius Stevenson, a surface operative, cross paths on a Pearl hunt and the results change the world.

Their chance encounter leaves both of them with powers that they can barely understand. Thrust together, they must head to decimated Seattle to find out the truth about who they are and what the Pearls really mean.

My thoughts- A fresh breath of air in the fantasy/sci-fi world. Though the plot of one group vs. another is standard, the idea of the Pearls is unique. The characters of Jesse and Cassius are well fleshed out. You feel Jesse’s angst at being a below level agent and sympathize with him as he is bullied. On the other hand, Cassius is brave and strong, devoted to his job as a Pearlhunter and secure in his feelings of elitism. Two completely different characters that work together well.

Now, regarding the Pearls. I loved this idea. You don’t find out what the Pearls are until towards the end, and then everything you thought you knew changes. Their truth adds a whole ethical spin that wasn’t there before and makes the crimes of ‘Madame’, the villain,  even more heinous.

Even though the book is YA, I say it is good for 10 and up. Great and imaginative, I can't wait for the sequel.
Posted by Dorine White at 8:24 AM