Book Review- Quest For The Scorpion's Jewel by Amy Green 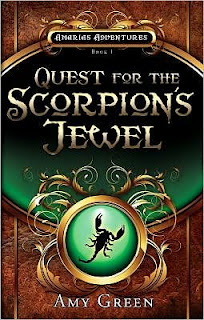 I have a fun middle grade adventure for everyone. I got a hold of a copy of Quest For The Scorpion’s Jewel by Amy Green, published by Warner Press.


The story- Jesse, a crippled boy, lives with his Aunt and Uncle, taking care of their inn. One night strangers knock on the door after curfew and Jesse’s life changes forever. At the door is a group of the king’s Youth Guard, young teenagers, sent on dangerous quests, that few ever survive. One of their party is dead, another injured, and Jesse is soon caught up in their quest.


Of course the quest, to find the Scorpion’s Jewel, means heading across the dessert and into enemy territory to steal their sacred relic. Things would be bad enough, but the unknown truth behind the Youth Guard is that it is really the king’s way of culling the smartest and most able of his citizens that may someday challenge his reign. So, as they proceed on their quest for the king, the king’s own men hunt them down.

My Thoughts - I enjoyed the story. It was neat that the hero of the book is a crippled boy who uses his brain to compensate for his lack of muscles. It is a really good tale for middle grade readers. I do have to say that I found the first few chapters unnecessary. They are more like a prologue, but all the information given is later found out in the book anyway. Plus, it is from a different character’s POV, which I found confusing until I realized he wasn’t the hero of the story.

Also, there is a subplot that runs throughout the story that I found over emphasized. It seems almost every character rings in on whether God exists or not. The ponderings do add extra depth to the story. It is just brought up a little too much.

Kids will like the action and pace of the book. Once the book gets into Jesse’s part, things keep coming at you, making you want to turn the page. The characters are fun and inviting. My favorite is a sub character, Samar, who is a an old desert thief.

Also, the book ends on an upswing, the group realizing they have to rush back to their fallen companion before the king’s men find him. Voila – book two, Escape From Riddler’s Pass.
Posted by Dorine White at 6:00 AM