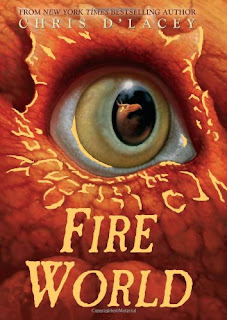 Up for grabs is book 6 in the Last Dragon Chronicles, Fire World, by Chris D'Lacey. To enter, fill out the rafflecopter form below. If you don't see it, click 'read more'.

From Goodreads:
After destroying a trace of dark fire, David, Zanna, and the Pennykettle dragons vanished. In a brand-new world, Co:per:nica, which runs parallel to that of Crescent Lane, firebirds roam the ancient librarium, a museum for books. But when 12-year-old David and Rosanna accidentally injure one of the firebirds, they are suddenly thrust into a remarkable adventure. The evil Ix have taken over one of the firebirds, turning it to the side of darkness, but the birds have a secret:They know about the existence of dragons. And from across the universe, one may come to their aid....