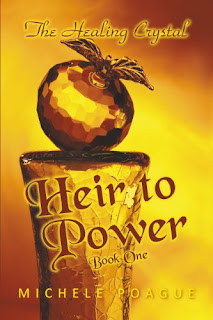 I have a YA sci-fi novel to share today, The Healing Crystal- Heir to Power, book one by Michele Poague. It is a big book, over 500 pages, so my review is longer than normal. There’s just too much good stuff to go over.


The Story- The colony of Survin has been hidden for over 5 centuries, protecting an ancient relic called the Healing Crystal. At sixteen, Kairma is the next in line to inherit the artifact.
There are several problems that confront her as the heir. First, she has been touched by the white ones, strange worm like humans that live underground, whose bite almost killed Kairma. She survived, but now resembles a white one with long white hair and pale skin. Several of the villagers distrust her and think of her as a witch, unfit to wear the Healing Crystal.

Second, a few years ago, the colony was hit by a plaque, killing off a large portion of the population. Because of old logs that have been kept by previous Mirals (female leaders of the colony), Kairma learns that their genetic pool is too low and that her people won’t survive unless new blood is introduced soon.

Third, in order to protect the Healing Crystal, the rules of Survin call for the killing of any strangers that stumble upon their colony. The older residents of the village will not hear of letting strangers in to help add fresh blood. As the story begins, one stranger is seeking shelter in their village, wishing to study the Godstones, four large faces that are carved into a near by mountain. Trep, desperate to survive, tells of weapons and cities beyond that could help the Survin people.

Risking all, Trep is allowed to leave with a handful of male villagers to buy guns and hopefully bring back fresh bloodlines. Kairma and the colony face great danger when evil men follow Trep back with plans to destroy the people for their gold.

My Thoughts- This story is amazing. In fact, it is the best part. Clues come at you from all sides as you realize these people are actually survivors of some deadly apocalypse that wiped out the planet Earth. I loved how people like us, are now considered gods in the eyes of the colony, who worship Mount Rushmore, thinking it contains the faces of the gods.

Now for some critique, the book is written from several character’s POV. It hops around like crazy. You have to read the first sentence of each chapter carefully so you know who is talking. I felt this was unnecessary. The author does a great job fleshing out each character and we don’t really need so many POV’s. I think it would have been fine from just Kairma’s and Collin’s.

Next, I can’t figure out what the healing crystal is. This isn’t a bad thing, it will definitely bring me back for book 2, but the whole book I was wondering what it was? It has no magic powers and I can’t think of anything in modern day that it could be. Things that make you say hmm?

Another interesting thing is the use of language. The people of Survin use English, passed down from their readings of the logs. It is kind of funny because some of the words have disintegrated, but you can guess what they used to mean. For example, their leader is called the Miral, modern day for Admiral. The use of the word annum all the time was annoying. I think using year would have been easier. Every time I read annum, it made me pause and pulled me from the story.

But oh wow, what a story. Like I said, it is the best part. If you’ve read enough of my reviews you know I love apocalyptic survival stuff. This book reminded me a bit of The Planet of the Apes, where all but a few traces are left of what civilization used to be.