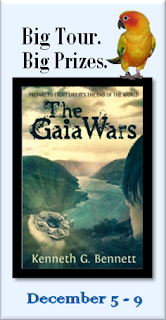 Welcome to The Gaia Wars blog tour! I had a chance to read this book and its sequel, Battle for Cascadia. So, sit back, relax and let me tell you a little about the books and the author, Ken  Bennett.


As part of this special promotional extravaganza sponsored by Novel Publicity, the price of The Gaia Wars eBook edition has dropped to just 99 cents this week.

You can also enter to win many awesome prizes, including a Kindle Fire, Amazon gift cards up to $100 in amount, 5 autographed copies of the book, and 5 autographed copies of its recently released sequel, Battle for Cascadia. Be sure to enter before the end of the day on Friday, December 9th, so you don’t miss out. Following this post is a schedule of Novel Publicity events.


I can win too! Over 100 bloggers are participating in this gigantic event, and there are plenty of prizes for us too. The blogger who receives the most votes in the traffic-breaker poll will win a $100 gift card as well. So when you visit Novel Publicity’s site to fill-out the contest entry form, don’t forget to say that I referred you, so I can get a point in the poll. Please vote for The Write Path in the Traffic Breaker Poll.


The Gaia Wars is a very interesting book which spins Native American folklore with science fiction, all set in modern day America.

The Story: 13 year old Warren Wilkes lives in a beautiful mountain community. He loves to hike in the wilderness and swim in the lake. But now, a greedy land developer has moved into town and wants to build a gated community. Desperate, Warren resorts to vandalism. But, he's seen, and has to make a run for his life. He heads to the only place he knows, the mountains. It is while hiding that he discovers an old corpse and a mysterious medallion.

Now, Warren begins to uncover mysteries from the far past and from his recent path. Specifically, the death of his parent's in a fire at a ranger station. The medallion leads him to a world where aliens exist and some of them want to destroy the planet.

The second book, Battle For Cascadia, finishes Warren's story. He is now leading a fight against an evil alien and its troops. With only a hand full of supporters and the help of Mother Earth, Warren takes on dark forces that even the US army can't conquer.

My Thoughts: First off, I really think the two books should have been one. The second is much shorter than the first. But that is a technical issue. The story itself is strong. I really liked the beginning of Gaia Wars. Warren is a typical teenager, out to protect what he loves most, in this case his mountain. And just like a typical kid he doesn't think about the consequences to his actions. So, when he goes after the land developer and his son, Warren is only thinking about a mean practical joke. But, things blow up  in his face.

Another thing I enjoyed about the beginning, is that you don't know who to trust. There are several people who seem to know about the medallion, but you never really know who the bad guy is until after a dramatic escape scene.

The blend of science fiction with Native American history is unique. I enjoy the way it is interwoven through out the story. Overall, both books are a good read for ages 10 +. There is a bit of violence and disturbing images. Mostly about shapeshifting soldiers that kill people and then take on that person's form. Older kids should be able to handle it. And as a bonus, the second book ends on a totally unexpected shift. 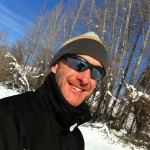 The Author:
Kenneth G. Bennett is the author of the Young Adult novels The Gaia Wars and Battle for Cascadia (the second book of The Gaia Wars), as well as the forthcoming Exodus 2018, a paranormal thriller set in the Puget Sound region of Washington State. A wilderness enthusiast who loves backpacking, skiing and kayaking, Ken enjoys novels that explore the relationship between humans and the wild. He lives on an island in the Pacific Northwest with his wife and son. Visit him on his website, Twitter, Facebook, or GoodReads.

To Win the Prizes:

1.Purchase your copy of The Gaia Wars for just 99 cents on Amazon or Barnes & Noble
2.Fill-out the form on Novel Publicity to enter for the prizes
3.Visit today’s featured event; you may win an autographed copy of the book or a $50 gift card!
4.BONUS: If you leave a comment on this blog post, you have another chance at $100!

Monday, Blogaganza on Novel Publicity! We’re kicking-off on the Novel Publicity Free Advice blog. We’ll ask the writer 5 fun and random questions to get everyone talking. Leave a comment or question in response to the post, and you may win an autographed copy of The Gaia Wars or its recently released sequel, Battle for Cascadia. Don’t forget to enter for the other contest prizes while you’re over there!


Tuesday, Twitter sharing contest! A tweet is tiny, only 140 characters. But on Tuesday, it could win you $50. Send the following tweet across the twittersphere, and you just may win a $50 Amazon gift card. Autographed copies of The Gaia Wars and its recently released sequel, Battle for Cascadia, are also up for grabs. The winner will be announced Wednesday morning. Here’s the tweet: Looking for a YA read that’s full of adventure & intrigue? Check out The Gaia Wars. Reduced to just 99 cents http://ow.ly/7ywpZ #whirlwind

Wednesday, Google+ sharing contest! Yup, there’s yet another awesome opportunity to win a $50 Amazon gift card, and this time it just takes a single click! Visit Google+ and share Emlyn Chand’s most recent post (you’ll see The Gaia Wars book cover included with it). On Thursday morning, one lucky sharer will be $50 richer. Autographed copies of The Gaia Wars and its recently released sequel, Battle for Cascadia, are also up for grabs. Three chances to win! How about that?

Thursday, Facebook sharing contest! Stop by Novel Publicity’s Facebook page and share their latest post (you’ll see The Gaia Wars book cover included with it). It’s ridiculously easy to win! On Friday morning, one lucky sharer will be $50 richer. Autographed copies of The Gaia Wars and its recently released sequel, Battle for Cascadia, are also up for grabs.

Friday, special contest on the author’s site! Win a Kindle Fire or a $100 Amazon gift card, simply by leaving a comment on Kenneth’s most recent blog post. How easy is that? Autographed copies of The Gaia Wars and its recently released sequel, Battle for Cascadia, are also up for grabs.
Posted by Dorine White at 6:00 AM