I recently read a great YA sci-fi/fantasy that I'd like to share. The title is Human Blend by Lori Pescatore. Lori signed my review copies of her first two books, Human Blend and Earth Blend, and I'm giving them away! Just fill out the rafflecopter form below. You don't have to use facebook (even thought that's the big box) you can sign in with just your name and email too. If you don't see it click 'read more'.


The Story- Julie is on the run  from some really bad guys, the raping, murdering kind. She has taken refuge in a small town called Marion, Virginia, the home of Mountain Dew. Immediately she is attracted to a local boy named Austin and sets about trying to make her move permanent.

She takes a job volunteering at the local hospital, where she can use her special ability, healing, on the sly. One doctor takes notice though, Dr. Eli, a handsome man with no heartbeat! (No, not a vampire). The stage is now set  for a romantic triangle and of course, the return of the really bad guys.

My Thoughts  - I just have to say, I've read some great self published works lately, the first Remembrance by Madow  (see review here) and now Human Blend. Personally I believe both these books should have been published by one of the big guys.

This story is unique and completely deserves its own little niche in the YA world. Look-out, because I'm going to give away some SPOILERS here. You see, Julie doesn't know who she really is. She was kidnapped as a child and raised by the kidnappers to do horrible things. The catch is, that for most of the book we don't know why she has her special abilities. Turns out, she is a human blend. Years ago, survivors from another planet took refuge on earth. Their only way to reproduce is to splice their genetic code into an already fertilized embryo, thus the blend. Each child/blend born has a special power or two. What a great plot line.

Now then, there is also a cool sub plot . Who is Dr. Eli and why does he have no heartbeat? Here we have the emergence of another all new type of paranormalish creature. Turns out Eli is an Earth Blend. A creature  made by Mother Earth to protect itself. These creatures are really cool, with special powers of their own.

The story is well written, with great new memorable characters. It is an upper YA novel not just because of instances of sex, but because some of the violent life Julie was forced into, was described, and its not pretty. I highly recommend you add Human Blend to your must read list. 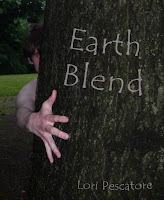 Now, a note about the second book- Earth Blend. This book takes up where Human Blend ends. It is full of more suspense and secrets. Plus, the love triangle continues. On the critical side, I felt that although the story is just as strong, there's a little too much back story. Lori fleshes out her characters well, and their history is obvious without needing to flashback to it.

The second book is also more on the violent side, with the flashback's spotlighting different character's disturbing pasts. Including a rape by the Earth Blend Percone, that I really didn't like, but luckily wasn't described in detail.

Lori again pulls the reader through the story with hints of secrets revealed and hidden powers discovered. Plus, there's the sweet feeling of revenge for Julie. Another great read by Pescatore.