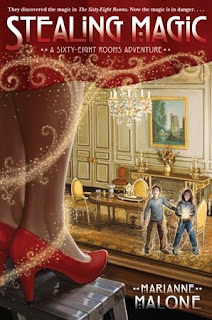 Today’s book review is a middle grade adventure entitled, Stealing Magic: A Sixty-Eight Rooms Adventure, by Marianne Malone. This book is the second in a cute series about two tweens who find out that the miniature doll rooms in a museum are more than just a display.
The Story:  Ruthie and Jack think that all is well with the magic Thorne Rooms at their local museum, until they use their magic key to shrink and enter one of the rooms. Before, the rooms were alive, filled with magic, but now, some of the rooms are static and dull.

With an art thief on the loose in town, Ruthie and Jack worry about their special rooms and are determined to find out what is wrong. In the meantime, Ruthie begins taking art lessons from Dora Pomeroy, an interior decorator that is studying the miniature rooms.
Things go from bad to worse when Jack’s magic key is stolen and more objects begin disappearing out of the doll rooms. Together, Ruthie and Jack discover the secret behind the magic rooms and put a stop to a villainous art thief.
My Thoughts: A great sequel, though not as fast paced as the first book. I enjoyed learning more about the magic rooms. The idea that you can shrink and enter into magical doll rooms from different eras and centuries is what every little girl dreams about.
I also like the subplot. Ruthie and Jack travel back in time to 1937, via the Paris room, and meet a Jewish girl at the Paris Expo. Knowing that she would be in danger if she returned to Germany, Ruthie and Jack concoct a plan to save her.
Great characters and a good plot make this book perfect for young readers. The book stands alone, though I think reading book one would be a good idea. It is easy to figure out who the art thief is, but, the way Ruthie and Jack go about catching her is the big story. The plot could have used a few more twists and turns, but I don’t think a young reader will be disappointed; they’ll be able to follow things easily.
Published by Random House Books for Young Readers, it will hit shelves on Jan. 24th, 2012.
Posted by Dorine White at 6:00 AM