Recently I posted an interview with author Gina Damico, author of Croak. (See Here) Now I have the opportunity to review her amazing YA novel. Croak will hit store shelves on March 20, 2012. 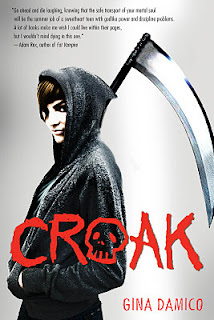 The Story- Lex has a problem. She is out of control and her parents can’t handle her anymore. As a last ditch effort, they send her off to live with her Uncle Mort, a farmer. But, Uncle Mort isn’t what he seems. Instead of farming animals, he farms humans. He is a grim reaper, living in a city of other grim reapers.

Lex must learn to control her anger, while learning a new skill, reaping. Things go great, until people start dying who aren’t supposed to die. Then, so do other grim reapers. Lex is thrust into a volatile situation, where no one is safe, and she seems to be the only one with a special enough reaping skill to catch the killer.
My Thoughts- I loved it. Croak is a great new YA novel with an original plot. Lex is a spunky kid, coming of age in a world of death. FYI- she curses a lot. The other characters are well planned out and full of their own quirks.
The plot is full of twists, the final one being so dramatic that I couldn’t believe it happened. I kept thinking Lex could save the person (you’ll have to read to find out who), but dead is dead. And then, instead of a happy ending, we have the lead in to book 2.
I think this book should be put in everyone’s to read pile. Gina did a great job.
Posted by Dorine White at 6:00 AM