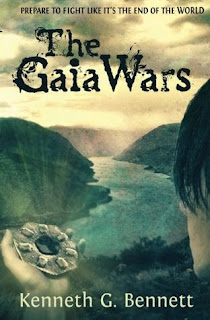 I reviewed this book back in December and really enjoyed it. Here's a slice of my review:

The Gaia Wars is a very interesting book which spins Native American folklore with science fiction, all set in modern day America.
The Story: 13 year old Warren Wilkes lives in a beautiful mountain community. He loves to hike in the wilderness and swim in the lake. But now, a greedy land developer has moved into town and wants to build a gated community. Desperate, Warren resorts to vandalism. But, he's seen, and has to make a run for his life. He heads to the only place he knows, the mountains. It is while hiding that he discovers an old corpse and a mysterious medallion.
Now, Warren begins to uncover mysteries from the far past and from his recent path. Specifically, the death of his parent's in a fire at a ranger station. The medallion leads him to a world where aliens exist and some of them want to destroy the planet.
See my full review here. And pick up your free copy on TUESDAY.
Posted by Dorine White at 6:00 AM