Goodreads Giveaway- The Rock of Ivanore by Laurisa White Reyes

My awesome sister in law, Lauri Reyes, is having her first book, The Rock of Ivanore, hit shelves this May. In the meantime, you have the chance to win a copy from Goodreads. Enter Here. 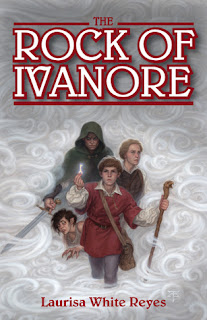 Book One of The Celestine Chronicles
Tanglewood Press
for ages 8 & up
366 pp.


The annual Great Quest is about to be announced in Quendal, a task that will determine the future of Marcus and the other boys from the village who are coming of age. The wizard Zyll commands them to find the Rock of Ivanore, but he doesn't tell them what the Rock is exactly or where it can be found.

With more twists and turns than a labyrinth, and a story in which nothing is as it seems, this tale of deception and discovery keeps readers in suspense until the end.

"A swift and compelling epic that readers of high fantasy will love." - Tony Abbott, author of The Secrets of Droon
Posted by Dorine White at 6:00 AM