Blind Spot by Laura Ellen- The Book, the guest post, the giveaway 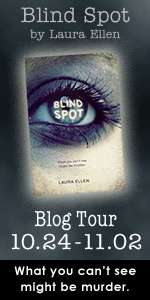 Hi and welcome to this stop on the Blind Spot Book Tour! Today I have for you a review, a guest post from the author Laura Ellen, and a giveaway. To enter the giveaway fill out the rafflecopter form below. If you don't see it click, 'read more'.


Blind Spot, a new YA thriller from author Laura Ellen, and published by Harcourt, just hit shelves this October.

The Story-
Sixteen-year-old Roswell Hart, Roz for short, is a sophomore at Chance High School in Birch, Alaska. She was excited for the first day of school until she noticed an unwelcome class on her schedule, special ed. She can’t believe her mom let her be put in special education just because of her macular degeneration. Sure, she has blind spots, but she is able to deal with things.

Stuck in her new Life Skills class, Roz meets Tricia, a strange girl who wears a cape and seems a little too interested in drugs. She also meets Jonathon, the teacher’s aide and handsome football player. Mr. Dellian, the teacher is a real pain in the butt, and makes Roz’s life hell. 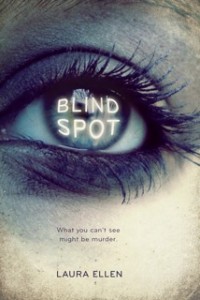 My Thoughts-
This book is a great who-done-it. It starts with several pages that take place in the present, the day Tricia’s body is found in the melting ice of the river. Then it skips back to forty days before the party, where we meet Roz and Tricia, and then it continues until Tricia is found six months after the party. It is during this part that the mystery is pieced together.

The author does a great job dropping clues. So good, that I picked the wrong person as the villain. There’s great tension, many twists and turns, and because of Roz’s faulty memory, we have a very unreliable narrator, who is putting things together at the same time as the reader.

I didn’t want to put this one down. I just wanted to know what happened to Tricia and who the bad guy was. A really good YA read. It does contain drug use, sexual situations, and violence. 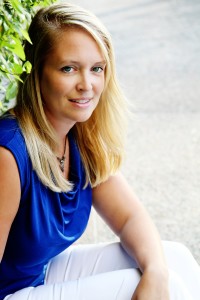 Thank you so much for hosting this stop of my blog tour, Dorine J I’ve had quite a few people ask if Birch – the city where Blind Spot takes place – is a real city in Alaska. So I thought I’d talk a little bit about that.
The answer is no. The city I call Birch is a fictitious town. I made it up so that I could take liberties with logistical aspects but it is loosely fashioned after Fairbanks, Alaska where I grew up. I wanted the setting to be as realistic and true to Alaska as possible because I hate when movies or books set in Alaska get details wrong – like skunks walking around in the woods. (There are no skunks.)
I also get asked a lot of questions about Alaska – including some pretty crazy ones.  So I thought it might be fun today to share my:
‘Top 10 Alaska Questions’:
10. So, you grew up in an igloo?
No, I didn’t. While it is true that many people still use ice houses, especially when hunting or fishing in the winter most Alaskans live in houses just like everyone else.
9. Everyone travels by dog sled, right?
Wrong. There are many remote areas of Alaska that cannot be reached by car where people rely on snow machines,  ATVs, planes, and yes, even dog sleds. But a good majority of Alaskans use cars.
8. How could you stand having snow year-round.
Believe it or not, there is a wide variety of weather in Alaska. Areas like Barrow, Alaska which is on the Arctic Ocean do see ice and snow much of the year; but other areas like Juneau or Kotzebue can often see more rain than snow. I grew up in Fairbanks, where there was snow about seven months out of the year.
7. Alaska is a foreign country.
Ah, can’t tell you how many times I’ve heard this. People often think Alaska is either a territory of the US, part of Canada, or simply a foreign country. Actually Alaska was the 49th state inducted into the union, back in 1959. It is true however that the military considers Alaska an ‘overseas’ assignment because of its cost of living and remote location.
6. Texas is bigger than Alaska.
There are a lot of Texans in Alaska, and they love their big state of Texas J But if we are talking area (not population!), sorry guys, Alaska is bigger! Alaska has 663,267 square miles, while Texas has 268,580.
5. You’re from Alaska? Do you know John?
Do you know all 800 kids at your high school? Well maybe you do. Even though Alaska has a small population compared to other states (about 722,000 live in Alaska), it is still a big, spread out place. There’s a good chance when you ask someone if they know someone who is also from Alaska, the answer will probably be no – but not always. We do find each other in the weirdest places!
4. It is dark all the time.
In the winter for about a month it is pretty much dark all the time. After the winter solstice around December 21st, however, Alaska begins to gain sunlight until the summer when the opposite happens. Then, for about a month there only sunlight! If Mom says, “Be home before dark!” You’re good to go. You can stay out all night without missing curfew!

3. When do they turn the Northern Lights on? (photo by Dave Dyet)
It sounds crazy, but I did actually have someone ask me this one summer while I was working at a hotel.  The Northern Lights (or Aurora Borealis) are natural occurring phenomena that are absolutely spectacular to see. You can’t control when they occur – but a cold, clear winter night is often a good time to look for them. And no, if you are visiting Alaska during the summertime, you won’t get to see them. It’s light all day long, remember?
2. Why is Alaska so cold when Mexico is so hot?
Are you staring blankly at the screen right now? This also was something someone really asked me. After staring at her with no clue what she meant for quite a while, I realized she thought Alaska was actually located down by Mexico in a little box. You know, where they show it on maps because they don’t have room? I’ve often wondered how many other confused souls are out there.
1. You were born in Alaska, so are you an Eskimo?
No. Although I was born and raised in Alaska, my family were transplants who came to Alaska when my father was a smokejumper (yep, he used to jump out of planes into fires – for a living!) There are many people who call Alaska home: Inuits, Yupiks, Athabascans, Aleuts, Tlingits, as well as people from all over the world who’ve come to Alaska through the military, as scientists, to work on the Alaska Pipeline, or just to be one with nature. Alaska is a gorgeous place. I hope you all can visit it one day.
Thanks for having me Dorine! Before I go, I have a winner to announce in the Blogger Love giveaway.

Congratulations to Audris at yabookmark.blogspot.com -- you are the fourth winner in Laura's 'Blogger Love' Giveaway! Audris will receive either a blog badge or button designed by Xpresso Design or her choice of any YA or MG book, plus a bag of swag from some upcoming authors! Laura will be contacting you soon Audris.
Bloggers there is still time to enter yourself in the Blogger Love Giveaway! Details are on Laura's website Contest page.

Check out the next stop on The Blind Spot Tour tomorrow- http://www.prettyinfiction.com/
The Giveaway-
I am offering up my ARC of Blind Spot! Laura is also donating a swag bag to the winner with a Blind Spot notebook, bookmarks, and magnet.  Fill out the rafflecopter form below to enter. Laura is also doing a giveaway on her own website for a signed hardback.  http://www.lauraellenbooks.com/

a Rafflecopter giveaway
Posted by Dorine White at 6:00 AM