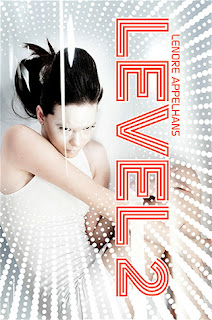 What happens after you die? Well, if you live in Lenore Appelhans’ world you end up in Level 2. Due out in Jan. 2013, Level 2 is published by Simon and Schuster.

The Story-
Felicia is dead. She died in a car crash just before she turned 18, leaving behinds family, friends, and Neil, her boyfriend. Now she is locked inside a white room with a pod full of other girls. All dressed in white, with no hair, the girls rest in chambers watching memories of their lives.

After unknown days, a door suddenly appears in Felicia’s pod, and Julian, a boy she remembers from her life, steps in. Julian helps Felicia escape and tells her about life in Level 2. It is basically a waiting zone for dead humans, overseen by angels, which allows people a chance to learn lessons from their life on earth. But, the angels have gone rogue and are harnessing the energies of the people in the chambers to fuel their war against heaven.

Julian entices Felicia to join the rebellion, dangling the idea of seeing Neil again as bait. But everything is not what it seems, and the role Felicia plays in saving the souls of humanity could be more than she is willing to pay.

My Thoughts-
An interesting adaptation of the typical fallen angel story. The plot itself is intriguing and little clues are dropped throughout the story that leads the reader to believe more is going on than what they read.

Our main character Felicia is special at the start. She remembers more than the other girls in her pod, and seems to care about the entire group. She is fiercely loyal to her friends, even when they don’t remember her. As a person she grows, becoming self-sacrificing and putting the needs of others before her own.

Julian is a mysterious character. There is just something about him that seems shady, and the author does a good job increasing the tension between Felicia and Julian. However, the core feeling that he cares about Felicia is strong.

I did have to ask myself where God was in the story. Seems like the bad angels are getting away with everything scott free.

My other critique is about the cover. Usually I don’t mention cover art, but with this book I think I need to weigh in. The title of the story, Level 2, does not give away anything about the book. So in my opinion the cover should help the reader gleam some info. In this case, the cover art tells you nothing. In fact, my first thought was that it was a girl serving tennis. I had to look past the title and white dots to notice that the girl’s knees are bent and she’s sitting? Overall, no clue is given about what the book is about.

If you are looking for an interesting new take on purgatory, this one is for you. It is full of action, mystery and angelic powers.